Han Ji Min’s transformation into the character Baek Sung Ah seems even more skillful when you meet the actress in person. Gracious and glamorous, Han is emphatically unlike the unsociable ex-con she plays in Miss Baek, the film that opened the 2019 New York Asian Film Festival Winter Showcase.

Whereas in real life the actress is warm and outgoing, Baek Sung Ah is withdrawn and wary, broken by a lifetime of betrayals. Baek goes to jail for defending herself against an assault by a powerful man. As an ex con, she struggles to get by, successfully avoiding emotional entanglements until she is moved to save an abused child.

To empathetically portray her character’s estrangement, Han had to imagine Baek’s unhappy childhood.

“When I approach a character I always start with how the character grew up and the backstory of that character’s life, leading up to the film’s starting point,” said Han. “But with the character of Miss Baek I spent a lot more time researching her back story and figuring out the way she grew up. Rather than starting with characteristics such as her gestures or facial expressions, I really wanted to understand where she was coming from and what sort of experience formed her.”

Lee Ji Won directed the film and wrote the script. Her story was inspired by real life events, which she shared with Han.

“I had a lot of conversations with my director,” said Han. “Together we really went into the very, very small details of the character’s life.”

Han, whose college major was social work, did not choose the role solely because she needed an acting challenge. After reading the script she decided to use the role to publicize the subject of child abuse.

“Everything started with the script, which I was very shocked to read. When I thought about how prevalent these abuse cases really are, it gave me the urge to participate in a film that touches upon such a widespread societal issue. Starting from that emotional place I sort of dove in without really thinking that much. The process of making this film was quite emotionally difficult  but the story has so much heart. I really wanted the story to reach audiences deeply in their hearts.” 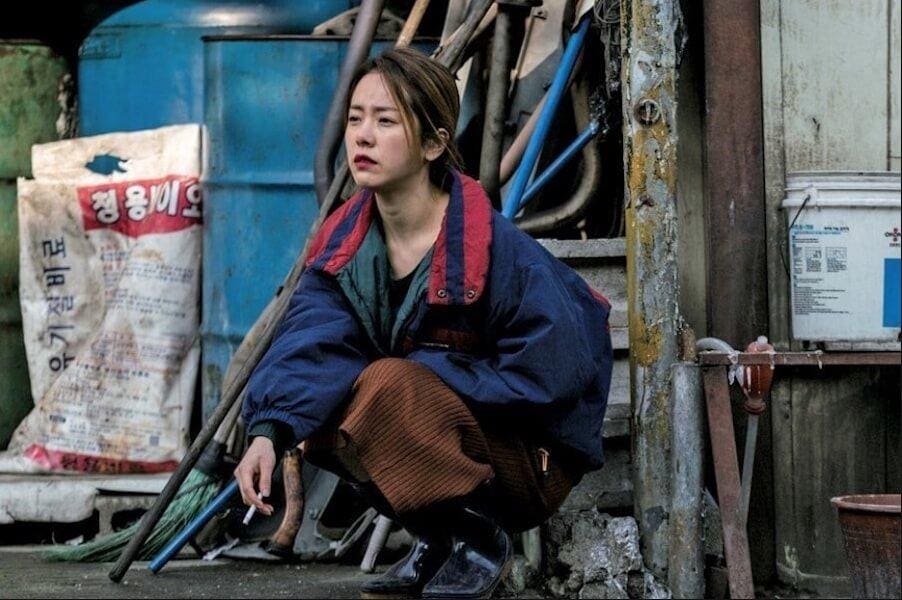 Han Ji Min plays Miss Baek, an ex-con who has no intention of making commitments.

Miss Baek is not the first time Han challenged herself with a role outside her comfort zone. Although well known for romantic TV comedies such as Rooftop Prince, she’s appeared in a range of dramatic film and television projects, playing roles that include a resistance fighter, a royal concubine and an overwhelmed working mom.

“For me, if there is ever an option as a performer wherein I can show a different side of myself, I  think that’s reason enough to try that different kind of project, even if I only have one scene in it.  As an artist I feel you are always trying to show different aspects of yourself.”

Despite the acclaim for her gritty portrayal in Miss Baek, her dream role might be in a romantic film.

“In Korea, as well as Hollywood, there is a dearth of meaningful roles for women being written in the industry. I would really love to be in a romantic film. I’ve done that in a lot of Korean dramas but I haven’t had the opportunity to do that in a film. So, if that could happen I would really love to do that because currently in the Korean film industry I feel like that genre is not considered as commercially viable as it used to be.”

Han has two dramas airing in 2019, The Light In Your Eyes, co-starring Nam Joo Hyuk and Kim Hye Ja, and Spring Night, with one of 2018’s most buzzworthy male drama stars, Jung Hae In. The first drama begins airing in the U.S. in February and Han recently joined the cast of the second.

As filming for a multi-episode drama lasts longer, harmonious collaboration with cast and crew is essential for a successful production. Dramas are an ensemble effort and there is often an on-set hierarchy, based on experience and star power.

“ I really felt this huge sense of responsibility that I had to carry this film and that was a first time experience for me. There’s a lot that I learned from being able to lead people on set. The next project I am doing, which is a drama, there’s definitely that sense of responsibility, but there’s also collaborating with your peers. Sometimes the responsibility falls more on the male leads who lead more on the set. With Jung Hae In, who I am working with this time, I started in my career a bit earlier than he did, but I want to try to harmonize with him and to collaborate to the best of my ability so we can communicate well. I was working on another drama called Familiar Wife. On the set of that one I really collaborated a lot with my senior actors, such as Ji Sung. I really learned a lot from that one, so I want to carry that experience on to this drama project.”

Han began acting in music videos and commercials as a high school student, but first gained confidence in her career choice while shooting the film Blue Swallow, playing a girl who dreams of becoming a pilot.

“It was the first time that I really got a feel for what acting was. In the past I’d only worked on dramas and I really didn’t have much communication with the director. My nerves and being scared also factored into interactions, but with Blue Swallow it was the first time that I actually worked closely with the director and that’s when I first felt what it was like to express myself through a character. It wasn’t a defining moment, where I thought, oh, this is my job, I’m an actor through and through, but I thought, if I keep on trying, keep on working on this craft, hopefully I will keep on getting better. I kept going forward with that thought.”

Before Miss Baek, Han had already won dozens of acting awards. Her role in that film took Best Actress awards for the 38th Korean Association of Film Critics Awards, the 39th Blue Dragon Film Awards, the 5th Korean Film Producers Association Awards and at the 19th Women in Film Korea Festival. In 2019 she will keep “going forward” with two new television dramas.

This story was originally published in forbes.com.