Patricia Miranda’s recent exhibit, “A Repairing Mend,” might easily be described as monumental—offering commentary on the definition of women’s work and creations, artistic collaboration and art’s ecological footprint. Yet, when Miranda dismantled the exhibit at the Jane Street Art Center in Saugerties, it all fits neatly into a box. 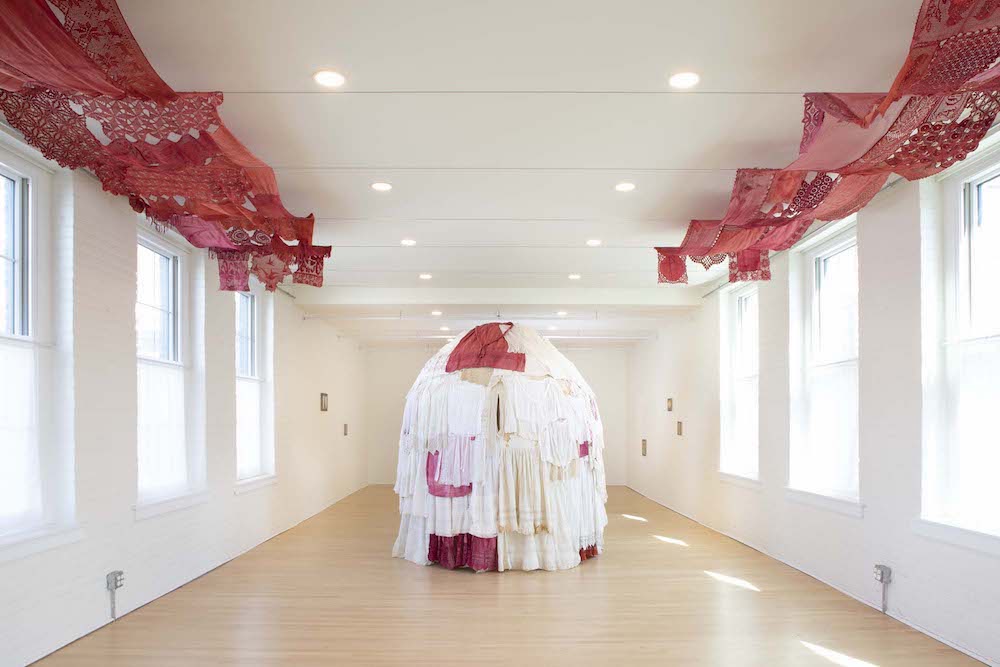 The focus of her thought-provoking exhibit was textiles and their intimate embrace of the human body, from swaddling clothes to final shrouds. The exhibit featured wall hangings crafted from circles of aprons, a tent-like structure constructed of skirts, and most impressively an expansive collaborative wall hanging fashioned from centuries’ worth of lace.

“I don’t think there’s such a thing as women’s art,” said Miranda, a curator, educator and founder of the artist-run organizations The Crit Lab and MAPSpace. “What I think, is that there are histories of people being designated as able to do this and not that. Or that and not this. That’s the way I would frame it. For me, it is making explicitly visible this history of domestic craft that was primarily done by women. So, the kind of unabashed ‘femininity’ of the lace and of the kinds of materials I am using, and the way I am expressing it is deliberate. It’s a form for me, an aesthetic form, but also a conceptual form.”

Miranda sought to explore traditional notions of what can be art, who can make that art, and with what materials.

Each piece of the 39-by-10 ft wall hanging was hand-dyed three, four, and even five times. It was sewn together by hand, then erratically sprinkled with tiny ex-votos of ears and limbs, miniature sculptures traditionally used as votive offerings. While lace might seem the visible definition of fragility, the interconnected pieces of her work speak of resilience. 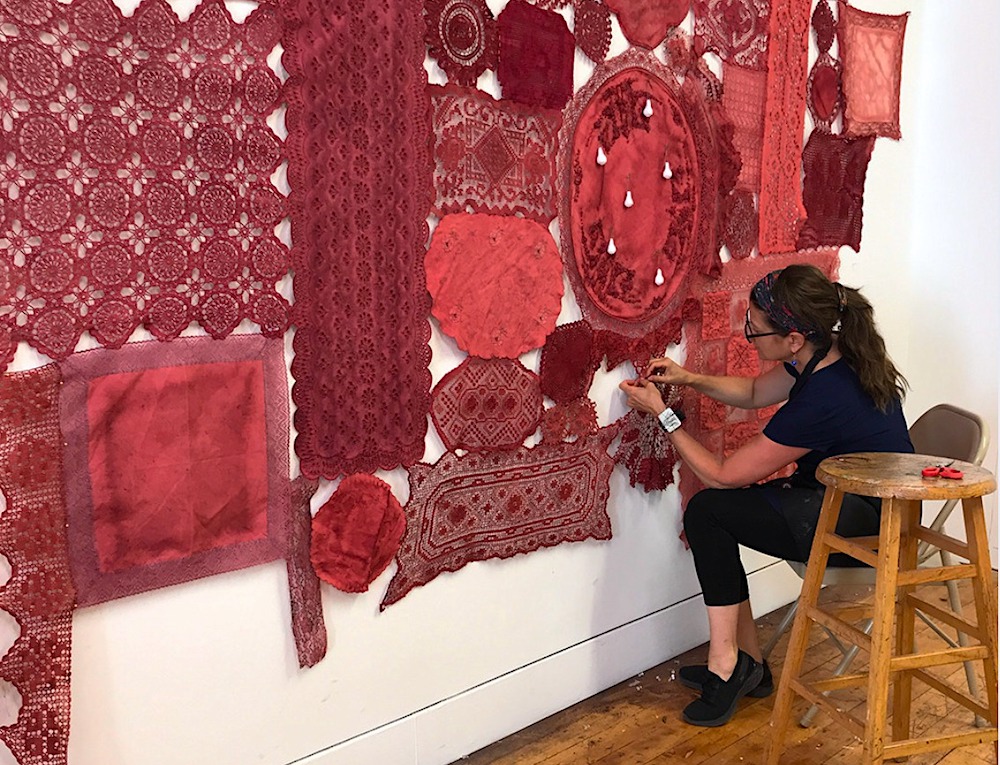 “There is also the geometric and mathematical complexity of lace as a form,” said Miranda. “When you look at these little pieces you tend to think of them as small things found in a home, but when you see it at this scale that geometry is made really visible. Lace is incredibly complex. Mathematically complex. Another fascinating thing about these objects is that once they are sewn together the lace has an enormous amount of tensile strength. It seems so delicate, but they are actually quite strong. It’s not strong like a piece of metal is strong. It’s not brutal strength, it’s tensile strength, which is also reflective of the resilience of the object, the resilience of the maker, resilience in the kind of world we live in today.”

“Lace is incredibly complex. Mathematically complex. Another fascinating thing about these objects is that once they are sewn together that lace has an enormous amount of tensile strength. It seems so delicate, but they are actually quite strong.”

One factor that led Miranda to consider creating with textiles was the environmental responsibility artists face.

“I think a lot about the ecological impact as a contemporary artist, who is also ambitious and would like to make substantial things, physically and in terms of concepts and ideas. Textile is an amazing way to aggregate something very small and delicate into something monumental that still has a small ecological footprint. That doesn’t take up enormous amounts of space. Once it’s taken down it also folds and collapses into a small space.” 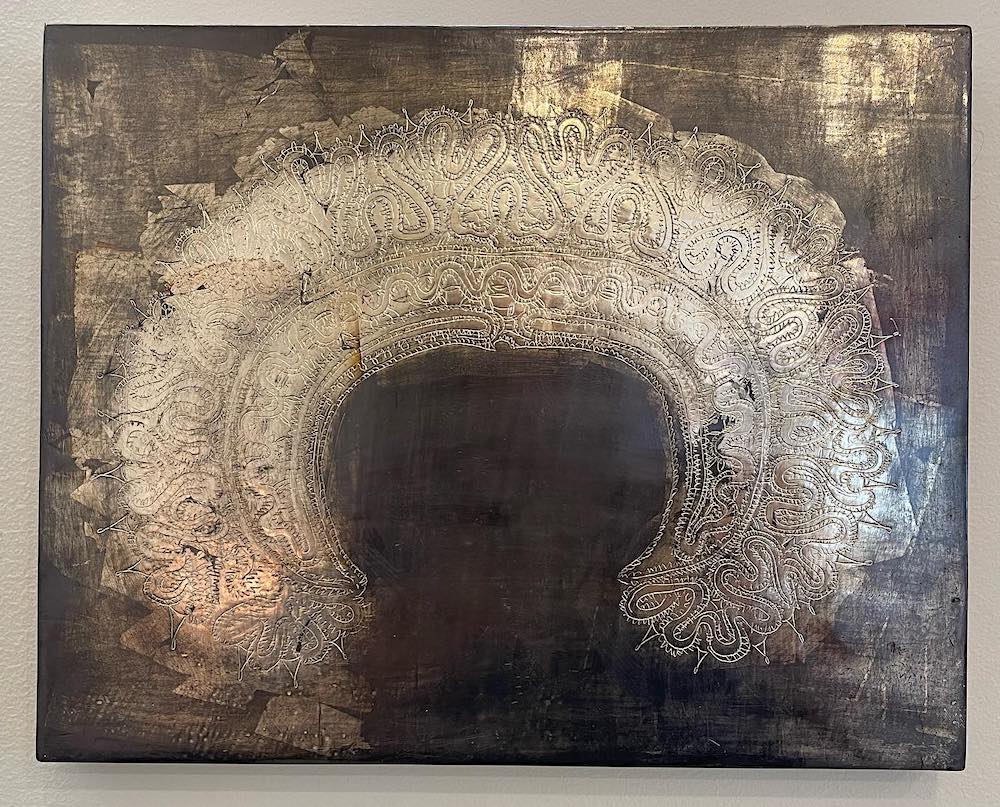 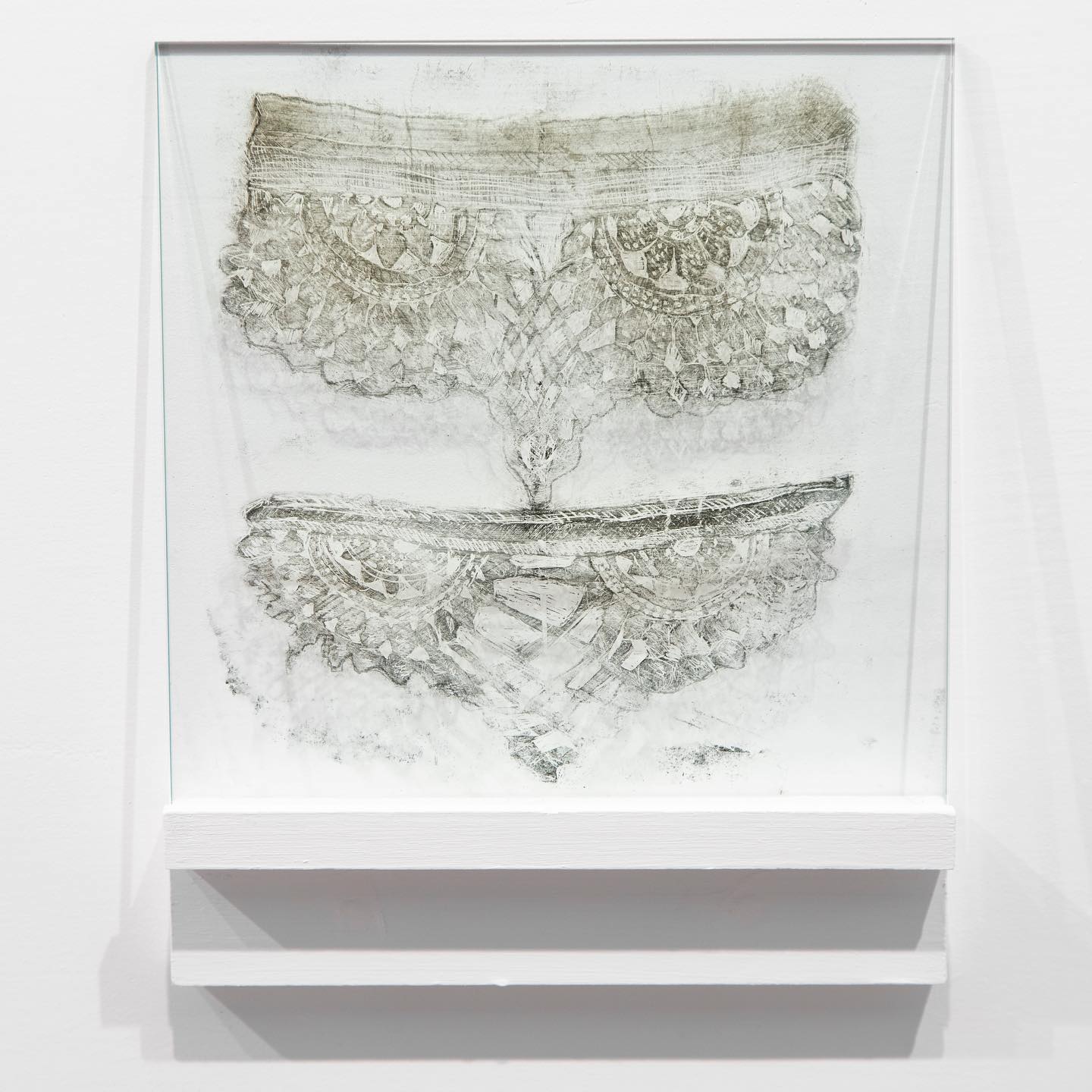 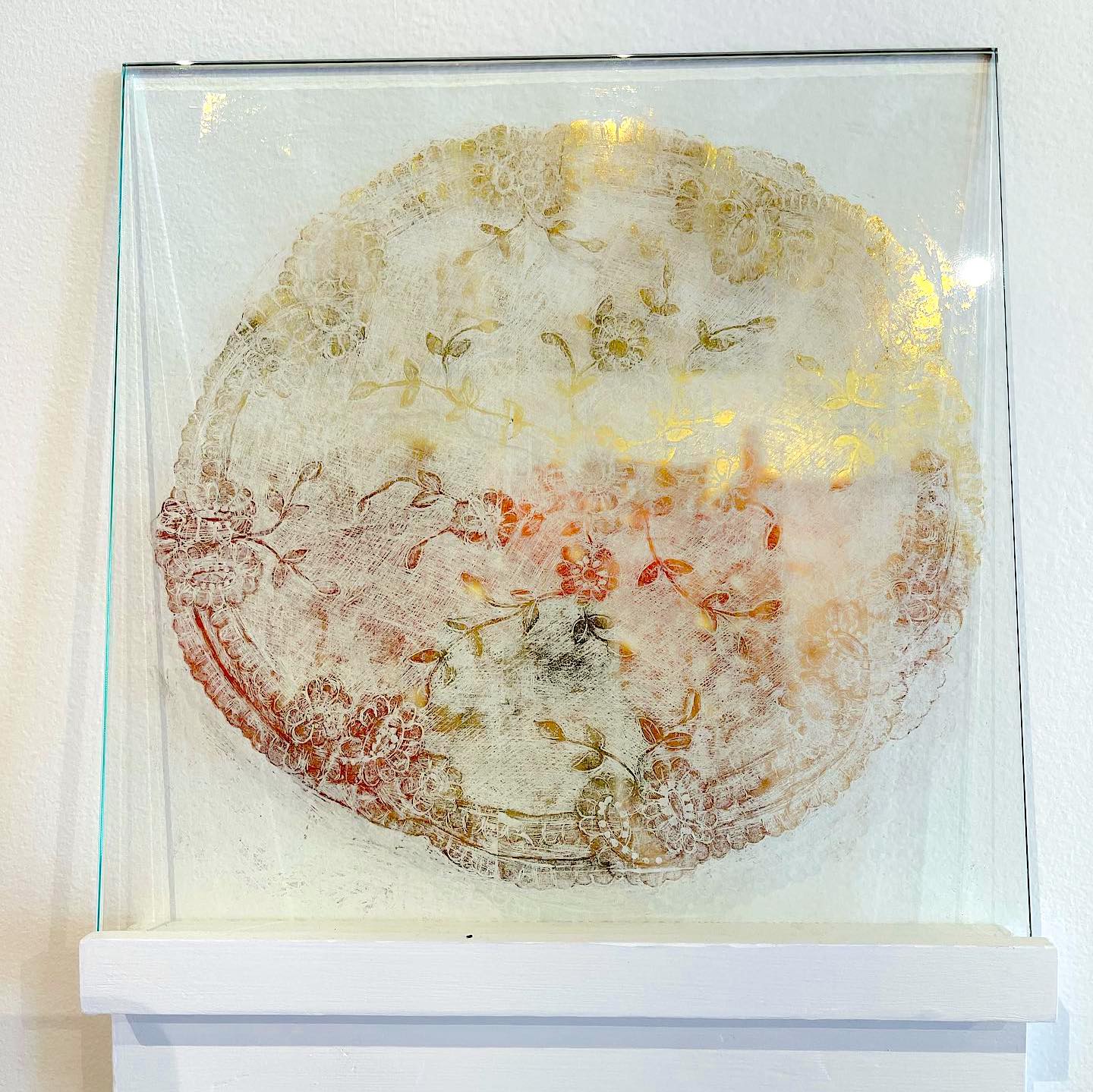 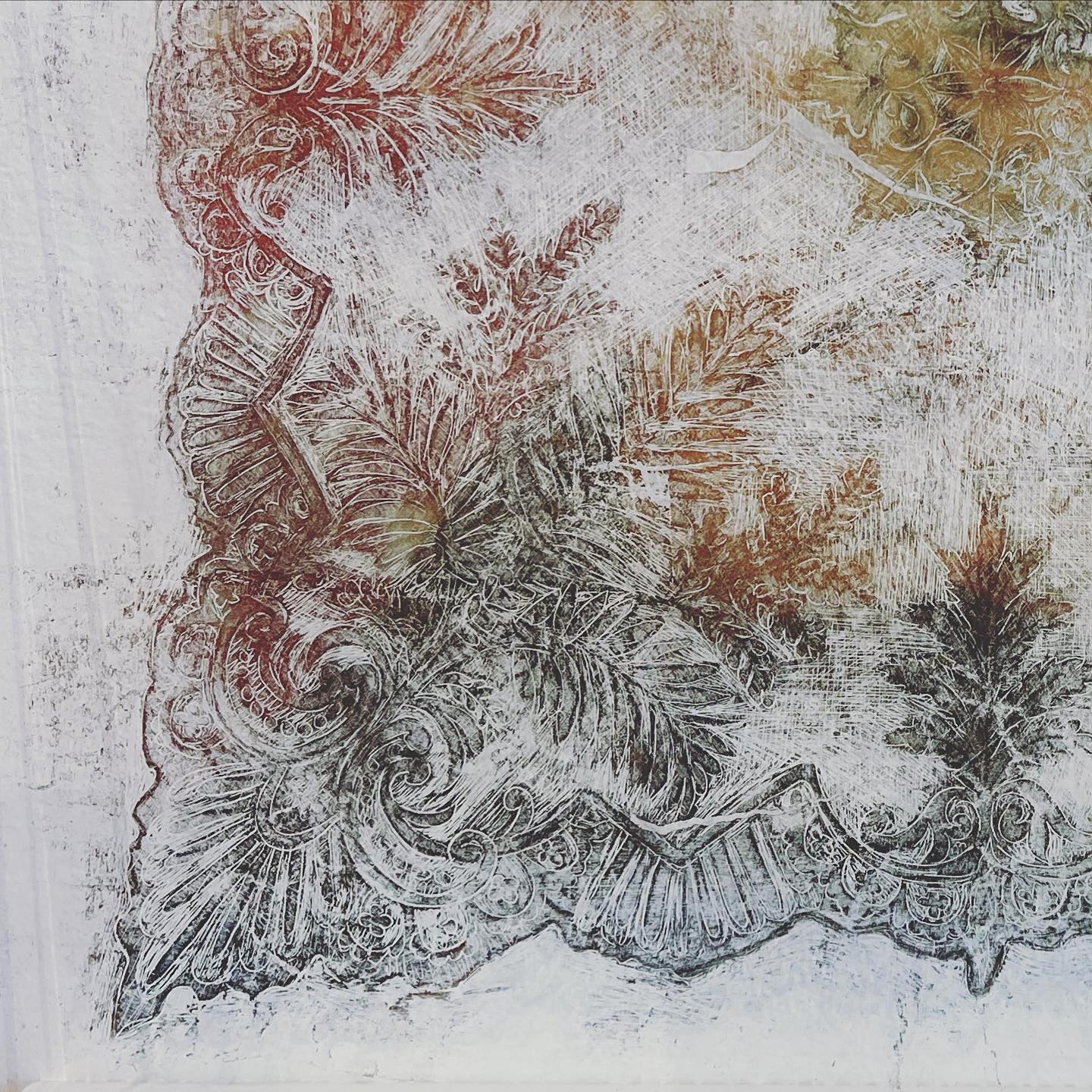 The project began when Miranda was toying with lace that once belonged to her Irish and Italian grandmothers. She posted a photo of her project on Instagram and received an offer of more lace.

“I was hoping to get a piece of lace, but instead I got a big box and that’s what started the piece. And then I kept getting boxes of lace. People found out not only that there was a place they could bring their lace, but that I was making something with it, that I was preserving it.”

The influx of lace is documented. Each piece is measured and photographed.

“People feel like they don’t know what to do with the lace,” said Miranda. “It’s very meaningful to them, but no one in the family wants it. They feel this is a way they can be remembered, by being in the archive and the lace can be used again in these objects.”

Some of the lace she receives is handmade, some machine-made. It’s all equal to Miranda, 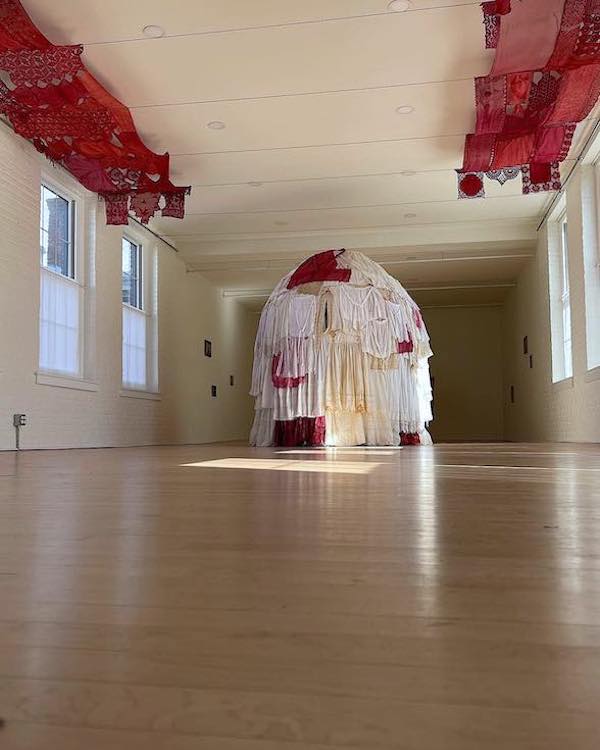 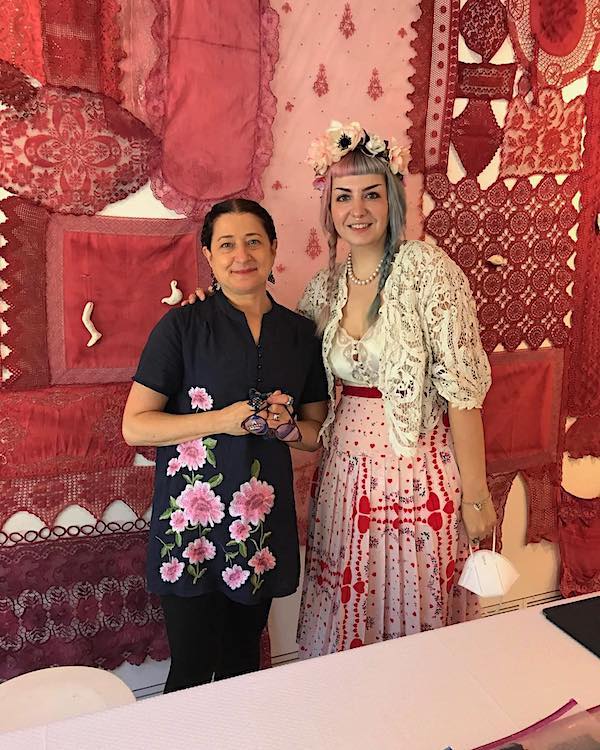 “Because it came from the family, its presence in people’s lives is as important,” she said. “Sometimes I get these beautiful handwritten notes and letters from people telling me about their grandmothers, who made the lace, and the history of the family. Their stories are also getting documented.”

Miranda also received skirts and aprons, their round shapes inspiring wall hangings and other creations.

“I started thinking about skirts and their history in this kind of domestic labor. Not only domestic labor but the hidden labor of care inside a home, where someone might not have enormous autonomy or power outside the home, but inside the home they were embroidering and creating these environments of safety.”

Part of what makes her largest wall hanging so visually arresting is its color. The lace wall hanging is a vivid red, which speaks of the intimacy with which textiles enfold the body. It is dyed using cochineal, a natural dye made from insects. Miranda, who teaches and lectures in museums on the history of color, has worked with natural dyes and pigments for 25 years. 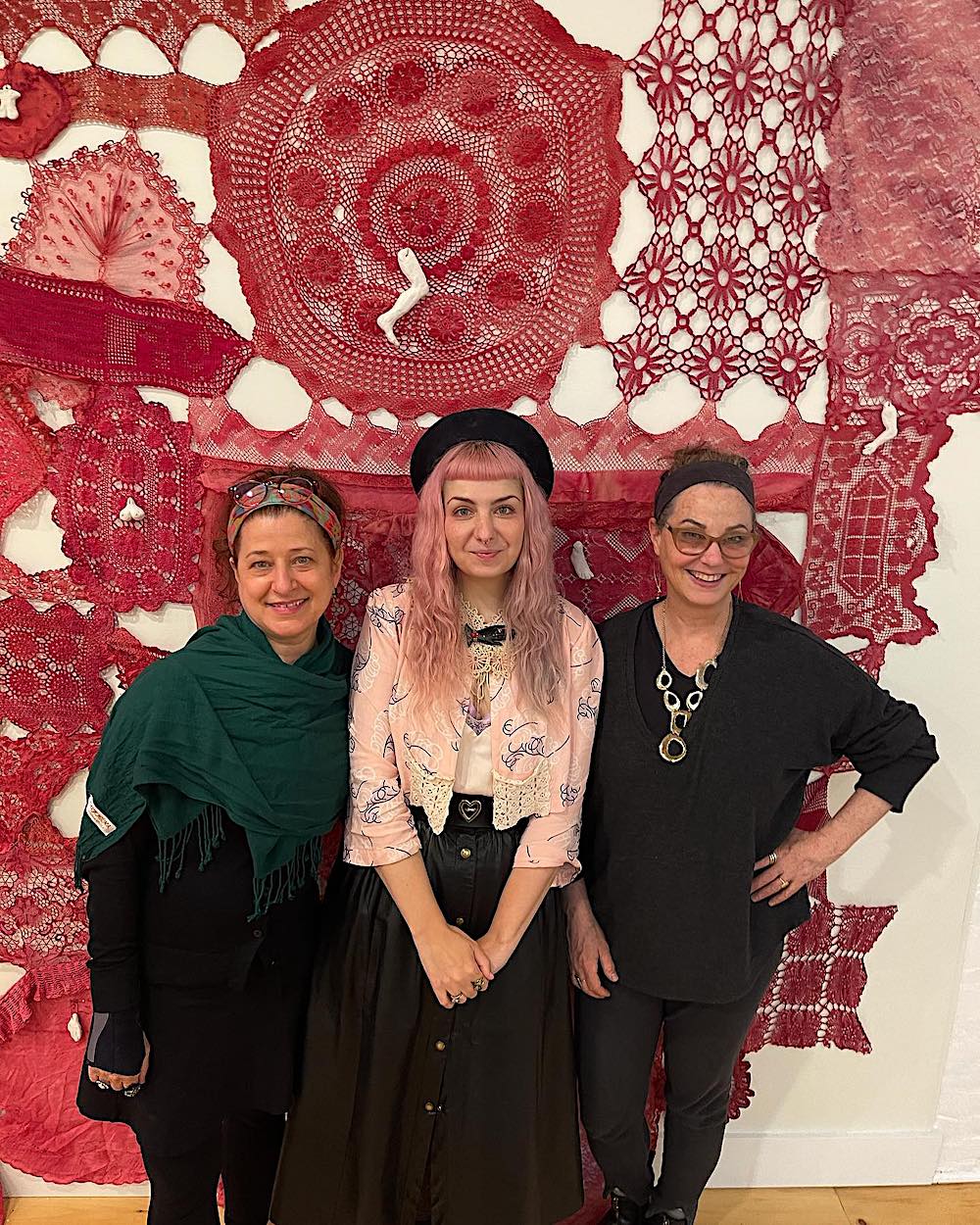 “I’m really working with dyes that have a long history connected to trade, connected to the history of colors, the weight of those materials, the way they impacted aesthetic movements as well. Cochineal is indigenous to the Americas. It didn’t exist anywhere else until the Spanish came. It has this incredible history that I am interested in.” 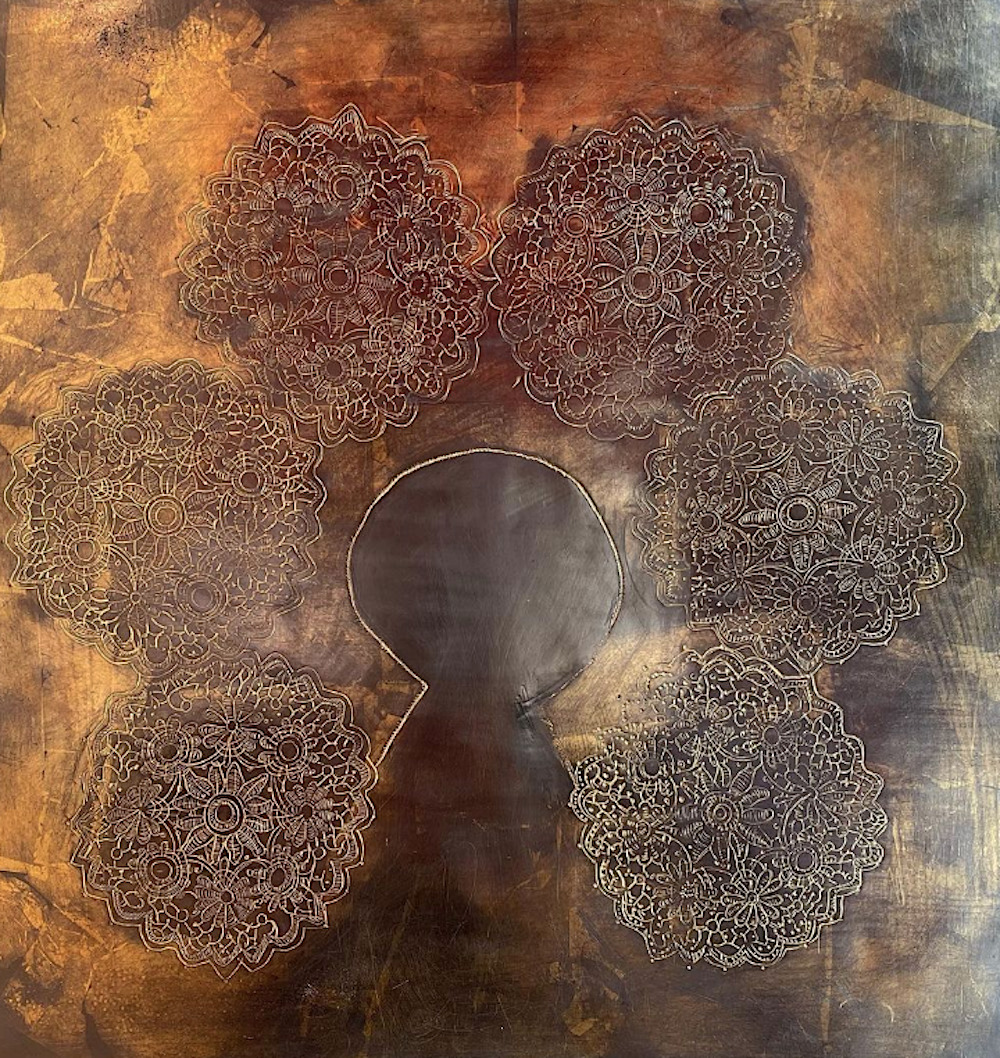 Although Miranda’s textile exhibit has ended at the women-owned and operated Jane Street Art Center, in October the exhibit will reappear in the 3S Art Space in Portsmouth, New Hampshire. Miranda, a Peekskill resident, continues to get boxes of lace so there’s no telling how much her work will have expanded by then. By its very nature, it is a collective art.

“This may be my life’s work,” she said. “Who knows? It’s very fruitful. I’m not bored with any of this yet. The collective component wasn’t there in the beginning and it’s very meaningful to me. I’m interested in the collective and collaboration and community. People bring me things because they want to be part of this.”

A Repairing Mend at Jane St. Art Center
A Repairing Mend is grounded in research of historic material practices, rituals of grief and mourning, and the violence of environmental and gendered commodification. The works reflect the role of textile in the labor of care in women’s lives, and as a form that wraps our bodies from cradle to grave. Recent projects began with family lace from her grandmothers, Emenegilda and Rebecca, and grew to include donations of lace and linens sent from around the world. The donations include antique, vintage, and machine-made lace in animal, vegetable and synthetic fibers, and accompanying stories of the family and the maker. This has grown into an ongoing archive and research project, The Lace Archive. Each piece is photographed, measured, and collected before being used in a work


About Patricia Miranda
Patricia Miranda is an artist, curator, educator, and founder of the artist-run organizations: The Crit Lab and MAPSpace. She developed residencies at MAPSpace and in Italy for The Crit Lab. She has been Visiting Artist at Vermont Studio Center, the Heckscher Museum, and the University of Utah; and has been awarded residencies at I-Park, Weir Farm, Vermont Studio Center, and Julio Valdez Printmaking

Studio. She received a grant from Northern Manhattan Arts Alliance (2021); two artist grants from ArtsWestchester/New York State Council on the Arts (2014/21); an Anonymous Was a Woman Covid19 Relief Grant (2021), and was part of a year-long NEA grant working with homeless youth. In 2010 she was a finalist for an MTA Arts in Transit project in Brooklyn. Miranda has developed education programs for K-12, museums, and institutions, including Franklin Furnace, the Solomon R. Guggenheim Museum, the American Museum of Natural History, and the Smithsonian Institution.

Miranda is currently an adjunct professor at Montclair State University and New Jersey City University and mentor at the MFA programs at Leslie University and Massachusetts College of Art. She was core faculty at New Hampshire Institute of Art’s low-residency MFA program from 2016-20, and taught curatorial studies in the grad program at Western Colorado University 2017-20. She was Practitioner-in-Residence at Lyme Academy College of Fine Arts of the University of New Haven from 2005-19, and led the first Lyme study abroad program at the university’s campus in Prato, Italy, in spring 2017. She served as director and curator of the Gallery at Concordia College-NY from 2008-12.

About Elena Kanagy-Loux
Elena Kanagy-Loux is a descendant of the Amish and grew up between the US and Japan, where she was immersed in both traditional Mennonite craft and the DIY fashion scene in Tokyo’s Harajuku neighborhood. After receiving her BFA in Textile Design from FIT, she won a grant which funded a four-month trip to study lacemaking across Europe in 2015. Upon returning to NYC, she co-founded the Brooklyn Lace Guild, an organization dedicated to the preservation of lacemaking, and began teaching bobbin lace classes. In 2018 she completed her MA in Costume Studies at NYU where she based her thesis on interviews with lacemakers that she conducted on her European travels. Currently, she is the Collections Specialist at the Antonio Ratti Textile Center at the Metropolitan Museum of Art, and co-editor of the forthcoming Bloomsbury Encyclopedia of World Textiles, Volume 3, Cloth in Cultures: Non-Wovens. 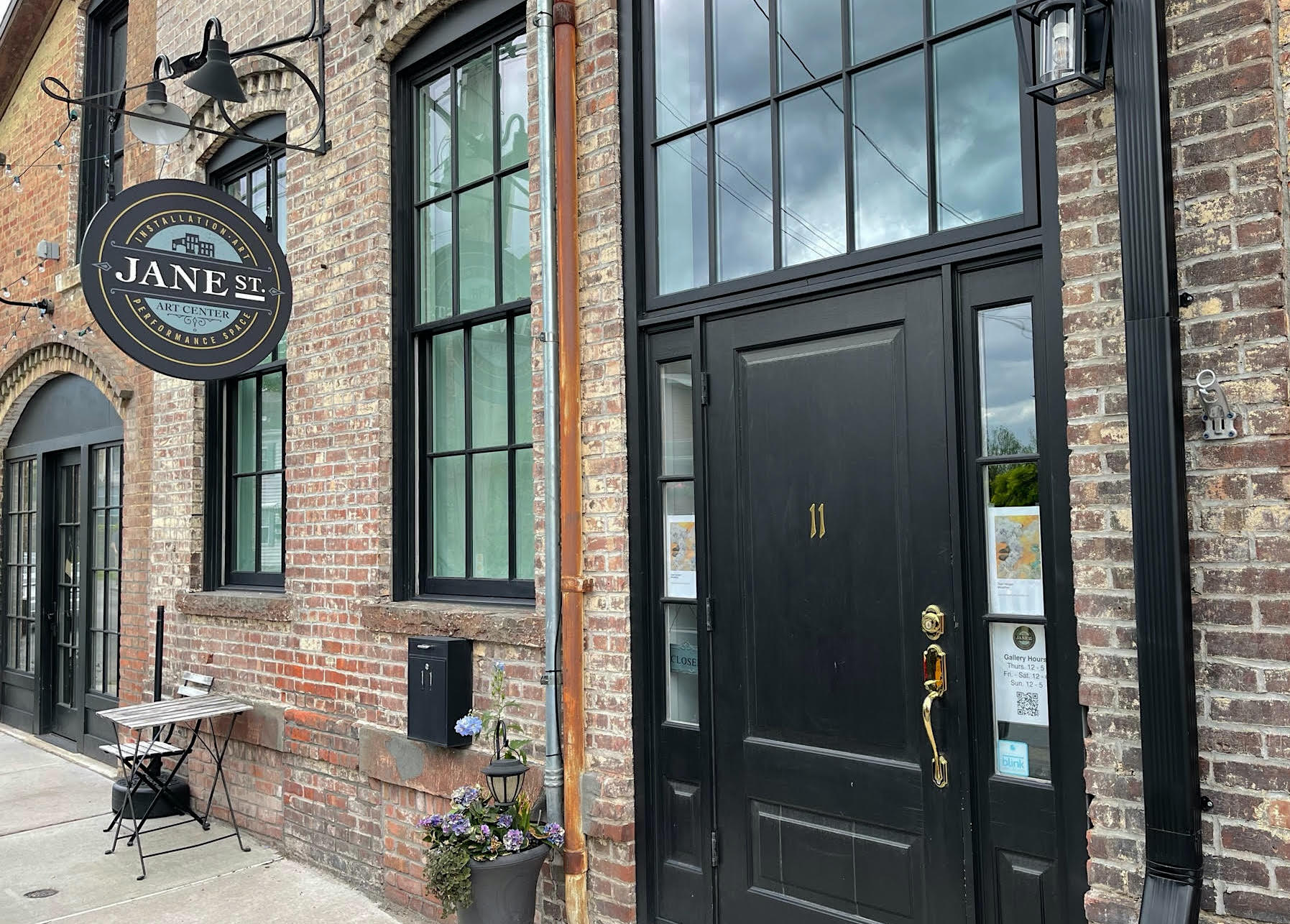 Our gallery is dedicated to solo and collaborative works, spanning both galleries, creating an immersive experience for the audience.

This story was originally published in Inside+Out Upstate NY