In the Netherlands, where New Year’s Eve temperatures usually dip below freezing, it’s traditional to indulge in a warm, deep-fried, powdered-sugar-dusted confection known as the oliebol. The translation for this time-honored treat is literally “oil ball,” but don’t let that dissuade you. Oliebollen are just the right palate-pleasing combination of oil, dough and sugar. This crispy, satisfying cousin of zeppolis and fritters can be a delicious way to warm up on a snowy night.

Although the Dutch don’t only eat oliebollen on New Year’s Eve, when celebrating the arrival of another year it’s often savored with a glass of champagne. Both are savored while watching holiday fireworks or the sparking city bonfires that annually consume discarded Christmas trees.

Variations on the oliebol exist in several countries. In Belgium they are called smoutebollen or lard balls, another unfortunate name for the tasty treat, and in France they are more elegantly called croustillons. In Italy, Croatia or Slovenia, these flavorful fried balls are named fritole or blinci. In Serbia they’re named ustipci and in Denmark a similar treat is the ebleskiver, which looks a little more like popovers.

The ritual of eating these luscious lumps of sugary dough started with a less-than-appetizing story, perhaps meant as a warning to eat well before the advent of mid-winter want. Eating oliebollen was considered a surefire way to ward off the whims of a cruel pagan goddess named Perchta. Her Teutonic name meant bright or glorious, but she was not always friendly. During the 12 Days of Christmas the goddess was said to fly around with evil spirits looking for something to eat. In her quest she might even use her sword to slice open the stomachs of those who’d already eaten to get at their food. Tradition said that eating oliebollen protected you because the fat absorbed from the cooking oil made Perchta’s sword slide off of her victims. No one worries about the vengeful Perchta anymore but the fat in the oliebollen may help insulate some Dutch citizens from the hypothermia associated with another traditional New Year’s celebration, the habit of swimming in icy waters on New Year’s Day.

Although mentions of Perchta date back to at least the 10th century, no one is sure exactly when the recipe for oliebollen was first written down. The earliest mention in Dutch cookbooks was recorded in the 17th century. Around that time, one Dutch Old Master painter, Albert Cuyp, also included a basket of oliebollen in a painting. 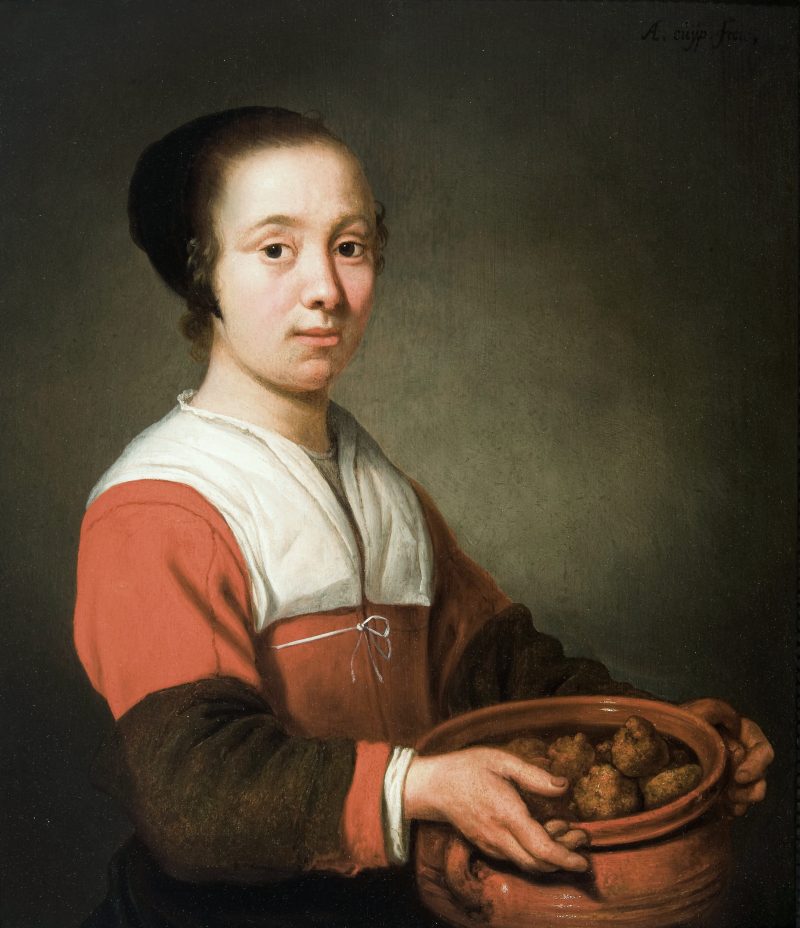 In that same century Dutch settlers brought oliebollen, then called oliekoeken, to New Amsterdam and other Dutch colonies. According to Peter G. Rose, a Dutch food historian based in the U.S., like many American transplants, oliebollen began to adapt, eventually morphing into a similar but less deliciously oily treat known as the doughnut.

The Dutch recipe for oliebollen has not changed much since the 17th century, with a batter that usually contains flour, eggs, a leavening agent and milk. The dough is then deep fried in hot oil and later dusted with sugar. There are variations, as sometimes the recipe is made with currants, candied peel or raisins. Some recipes contain cinnamon.

“My favorite is my mother’s recipe, which has chopped apples, raisins, currants and candied fruit mixed in,” said Rose, author of Delicious December: How The Dutch Brought Us Santa, Presents And Treats. Every year she prepares oliebollen for family and friends.

While some Dutch families take pride in preparing a family recipe for the festivities, many city dwellers prefer to buy oliebollen from street stands, with the most popular gathering long lines of fans on the last night of the year. An advantage to making your own is that you can experiment with the recipe and how they’re served. Oliebollen are delicious with just a dash of sugar but they can also serve as the starting point for heavenly adaptations.

That’s what Sylvan Perez of Gezellig Catering has done. Perez spent some of his childhood in the Netherlands and occasionally prepares the nostalgic treat in his Brooklyn home. Sometimes he likes to glam it up, creating versions that require a spoon.

“You can serve them with a Calvados Caramel Sauce to dip in or offer assorted dipping sauces, chocolate, caramel or cassis syrup,”said Perez. “Or you can dip them in a chocolate fondue.”

Want to try your hand at oliebollen? Here’s a recipe from the Netherlands Tourism Board. You can also buy mixes from U.S. stores that sell Dutch products, such as Kaas and Co., A Touch of Dutch, All Things Dutch or even Amazon.

Whether you sample oliebollen with champagne, dust them in sugar or dip them in fondue is up to you. Out with the old. In with the new and some satisfying calories to ward off the cold.

This article was originally published in Paste Magazine.