Bryan Richardson of Utility Bicycle Works is bent on fixing and reclaiming bicycles for a healthier community.

After 10 years of living in the Hudson Valley and four years of managing a Beacon bike shop, Bryan Richardson chose to open his own repair shop in Kingston, a place where bike use had already gained some momentum.

“The bike advocacy that already existed in Kingston was something I noticed when visiting,” said Richardson. “Just sitting in one spot, seeing all the practical cyclists going to work or going shopping, using their bikes in a practical way, with baskets or racks or bags. When I first started in Beacon there weren’t so many riders yet. Here, I got the sense that there was already something in motion and I would be part of it. That’s really inspiring.”

Richardson has restored, repaired, and renovated bikes at his Wall Street shop, Utility Bike Works, since May. He’s always liked to puzzle out mechanical things but for the last 10 years, and bikes have been his passion.

“I never get bored working with bikes,” said Richardson. “There are so many things you can do and there’s a lot of room for creativity. I was an artist growing up, so there’s a mechanical, almost rote, approach paired with a room for creative touches, an artistic element. That pairing is very attractive.”

“The attention to detail and craftsmanship in some of these older bikes is pretty amazing. If you were to get the same sort of ornate framework today you would be spending exponentially more money. There was a point in time where design was thoughtful and very artistically focused and also bikes were cheaper to make, so that made for a perfect storm.”

Older bikes are adaptable to renovations that suit the specific needs of the owner, says Richardson. And it’s important to recycle. “You don’t always have to buy something brand new.”

Richardson now participates in the bike advocacy that first attracted him to Kingston, working with organizations such as the volunteer-based advocacy group Bike Friendly Kingston to make Kingston a more bike-able city. The city has been responsive to the need for safe cycling opportunities and is currently engaged in plans to improve pedestrian and bicycle safety on Broadway, as well as link Kingston to a network of rail trails for biking.

“What’s unique about Kingston is that it’s the hub for a lot of old rail lines,” said Kingston Mayor Steve Noble. “Cyclists will be able to ride from Kingston to New Paltz or to the Catskills or to the Walkway Over the Hudson. It’s exciting and it offers an option for people who are nervous about cycling in the city.”

The plans include adding bike lanes to sections of Broadway to help city cyclists safely navigate the street that connects Kingston neighborhoods. Noble, who ordered bike racks for City Hall, said the plans seek to “increase people’s interest in cycling and make it easier to leave the car behind.”

Work on Broadway renovations begins in the summer of 2018 and is expected to take a year. Connecting the rail corridors could start this year. That’s good timing for Richardson’s repair shop and some older bikes languishing in garages and basements.

“As soon as I opened I met all these riders and customers and neighbors that were super excited to have a shop like this,” said Richardson. “It seemed to make sense with what they were already doing.” 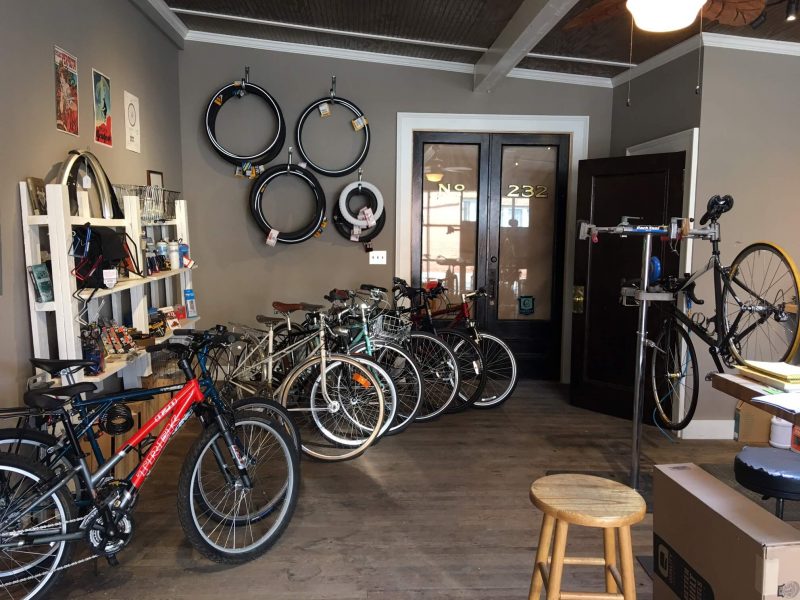 This article was originally published in Hudson Valley Magazine.