Memorial Day honors the brave men and women who served in the nation’s armed forces. One fitting way to recognize that sacrifice is to visit a monument dedicated to their service, and though many monuments honoring U.S. veterans are located in Washington, D.C. or Arlington, Virginia, there are monuments to visit around the world, each offering a beautiful and distinctive tribute.

No one knows for sure which American soldier rests under the Tomb of the Unknown Soldier at Arlington National Cemetery. The unidentified soldier died in France while fighting a World War I battle, and his remains were interred at the site of the Washington, D.C. monument in 1921. The unidentified soldier was chosen to represent the many American soldiers who lost their lives during World War I. Engraved on the snow-white marble tomb are the words, “Here rests in honored glory, an American soldier known but to God.” Eventually, an unknown soldier from World War II, the Korean War, and the Vietnam War were also interred (though the Vietnam soldier was eventually identified and moved by his family to a cemetery in St. Louis).

The National World War II Memorial, which opened in 2004, honors the 16 million members of the U.S. armed forces who served during World War II, the more than 400,000 soldiers who died, and the civilians who worked at home to support the war effort. The entrance to the Washington, D.C. memorial features 24 bronze bas-relief panels illustrating how the war affected the lives of those who fought and those who waited for soldiers to return. A wall of more than 4000 gold stars pays tribute to the lives lost, and 56 granite columns split into two-half circles encompass a pool fitted with fountains.

The Korean War Veterans Memorial is an outdoor monument located near the Lincoln Memorial in Washington, D.C. It commemorates the sacrifices of the 5.8 million Americans who served in the U.S. armed forces during the three-year Korean War. During that period 54,246 Americans died and 103,284 were wounded. The memorial is distinctive because of the 19 larger-than-life stainless steel statues of poncho-clad soldiers that occupy a triangular field, as well as for the black granite memorial wall covered in etchings of National Archives photos. 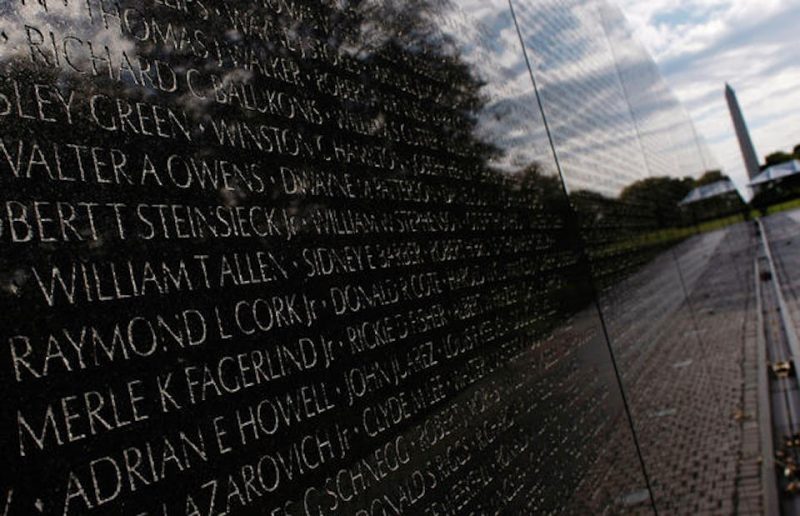 The Vietnam Veterans Memorial Wall pays tribute to those soldiers who were killed or went missing in action during the Vietnam War. The memorial consists of three parts: The Memorial Wall, the bronze Vietnam Women’s Memorial, and The Three Soldiers statue. The wall is actually two walls that stretch almost 300 feet and contain 58,000 names, according to the date of casualty. The Women’s Memorial honors the 265,000 women who served, many of whom were nurses. The Three Soldiers shows the camaraderie between soldiers from different backgrounds while serving their tour of duty. 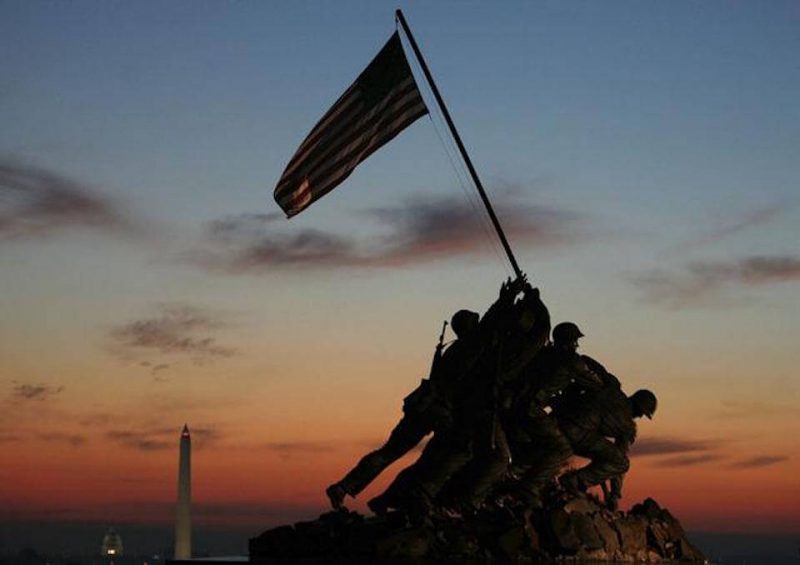 The Marine Corps Memorial, also known as the Iwo Jima Memorial, does not pay tribute to a specific war but rather the dedication of Marine Corps members. The bronze statue at this monument may be the most famous and easily recognizable of all U.S. war memorials. It is modeled on a photograph of six soldiers who raised an American flag at Iwo Jima in 1945, an action that signified the end of World War II. The memorial is dedicated to the Marines lost in all U.S. wars, as well as those who served with them. The base of the memorial lists every major battle that Marines fought in. 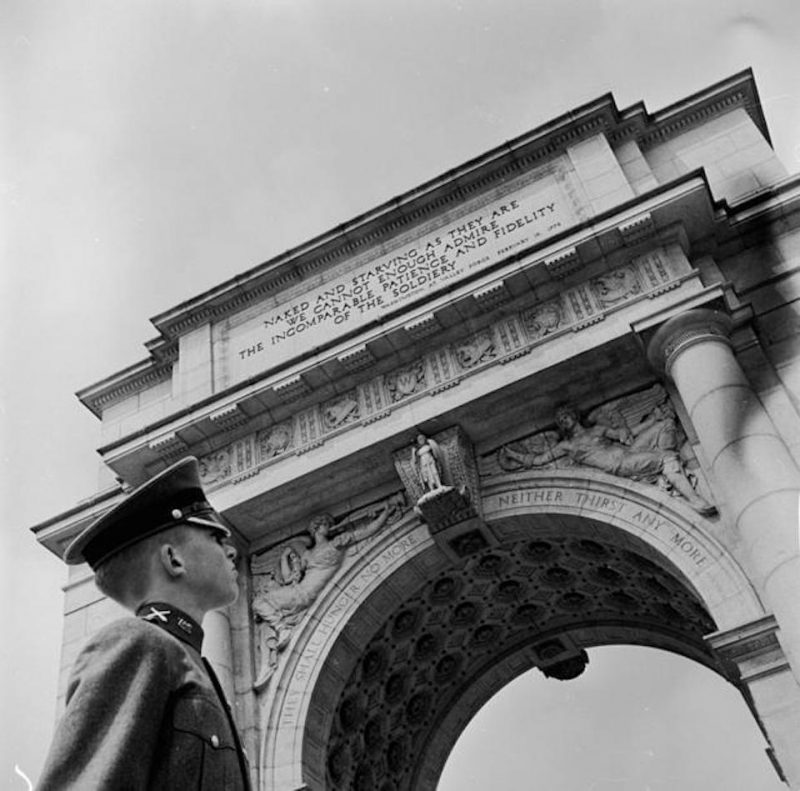 The National Memorial Arch commemorates the difficult winter endured by General George Washington when his Revolutionary War forces camped at Valley Forge. Paul Philippe Cret’s design for the 60-foot high arch was inspired by an arch built for the ancient Roman emperor Titus. Located in Valley Forge National Park, the arch was dedicated in June 1917. Inscribed at the top is a quote from George Washington which refers to the winter his troops spent there: “Naked and starving as they are, we cannot enough admire the incomparable patience and fidelity of the soldiery.” 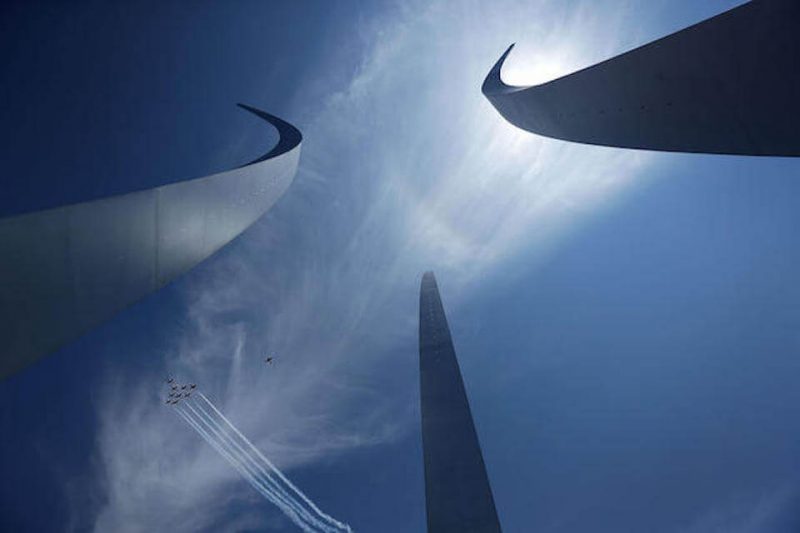 The Air Force Memorial in Arlington, Virginia, honors the service not only of the men and women of the United States Air Force, but also the Aeronautical Division and Aviation Section of the U.S. Signal Corps and all other aeronautics and air corps services. The memorial’s design evokes images of flight, and the stainless steel spires glisten on sunny days and are illuminated by individual light sources at night. At the west entrance, statues of two soldiers stand guard, symbolizing patriotism and power. 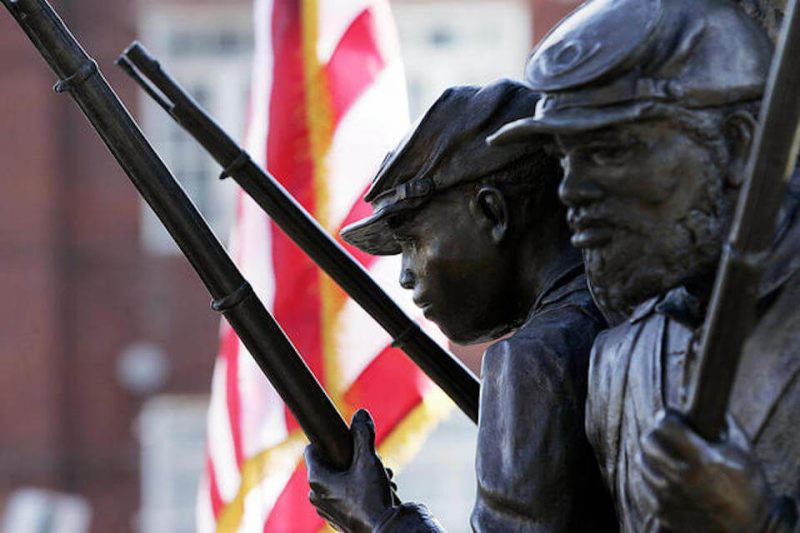 During the Civil War, more than 200,000 African-American soldiers served in the United States Colored Troops. The African American Civil War Memorial in Washington, D.C. tells the story of these 19th century heroes and commemorates their service with a bronze statue titled “The Spirit of Freedom.” The memorial also includes a curved wall inscribed with the names of the men who fought in the war. The museum’s African American Civil War Memorial Registry documents the family trees of more than 2000 descendants of the men who served.

9. THE WOMEN IN MILITARY SERVICE FOR AMERICA MEMORIAL // ARLINGTON, VIRGINIA

The Women In Military Service For America Memorial in Arlington, Virginia, honors the three million women who helped defend the nation during its almost 250-year history. The memorial honors their service with exhibits, film, and a Memorial Register, which preserves the stories of more than 258,000 women. The memorial features a neoclassical curved retaining wall, a reflecting pool, and an Education Center, where a roof of glass tablets is inscribed with quotes by and about the women who defended their country. The memorial was dedicated in 1997.

The American Veterans Disabled for Life Memorial in Washington D.C. is the first national memorial dedicated solely to disabled veterans. Leaving the battlefield alive did not mean the battle was over for many American servicemen and women—more than four million veterans have been injured in the line of duty, and those injuries can profoundly affect their post-service lives. The memorial’s 48 etched-glass panels display the stories of these soldiers. At the center of the memorial, which opened in 2014, is a star-shaped fountain and triangular infinity pool, which constantly recycles water. A ceremonial flame stands at the core of the memorial that is located just east of the U.S. Capitol Building and the Botanic Gardens.

The Prison Ship Martyrs Monument may not be one of the best known of the nation’s memorials, but it honors the 11,500 American prisoners of war who died aboard British war ships during the Revolutionary War. Some of the prisoners who died under the terrible shipboard conditions are buried underneath the monument. The monument’s granite Doric column was designed by Frederick Law Olmstead and Calvert Vaux, who designed both New York’s Central Park and Brooklyn’s Prospect Park. The 100-foot column stands in Fort Greene, Brooklyn, and was dedicated in 1908.

Some impressive monuments to the service of America’s soldiers can also be found in other countries. France has a total of 11 cemeteries and monuments dedicated to the service of U.S. soldiers, and the Normandy American Cemetery and Memorial in Colleville-sur-Mer is located on a bluff overlooking one of the Normandy beaches that U.S. troops landed on during the Normandy invasion. The 172.5-acre cemetery contains the graves of 9387 soldiers, many of whom lost their lives in the D-Day invasion. The memorial has a semicircular colonnade with a bronze statue in the center called the “Spirit of American Youth Rising From the Waves.” A garden to the east features inscriptions of the names of 1557 soldiers who lost their lives during the Normandy campaign but could not be found or identified.

The 65.5-acre Netherlands American Cemetery and Memorial is located in Margraten on the route that Hitler used to withdraw after U.S. forces liberated the Netherlands. The memorial features a tall tower facing a reflecting pool. At the base of the tower is a statue of a mourning woman that represents the losses suffered during war. Visitor buildings feature engraved military operations maps, a Court of Honor with a reflecting pool, and Tablets of the Missing, which has 1722 names. The burial area is the resting place for 8301 of the nation’s military members.

The United Nations Memorial Park in the South Korean city of Busan was dedicated in 2013. The memorial park contains 2300 graves of service members from 11 countries. Altogether, 1.7 million U.S. military personnel served during the Korean war, and although 33,739 died in battle, most were reinterred in the States. Only 36 graves of U.S. soldiers remain in Busan; the American monument on the site reads, “This monument is to the American men and women who gave their lives in defense of the freedom of the Republic of Korea 1950-1953.” The park’s Main Gate, dedicated in 1966, illustrates the concept of earthly life growing toward heaven.

The Cambridge American Cemetery and Memorial honors the service of U.S. soldiers in during World War II and was dedicated in 1956. Notable Americans buried or memorialized there include Joseph P. Kennedy Jr., the older brother of President John F. Kennedy, and musician Glenn Miller. The curved cemetery has 3809 headstones, and the wide mall of reflecting pools has a chapel and a new visitor’s center, which opened in 2014, offering information about air campaigns carried out during the war, including two large marble maps laying out military plans.

All photos via Getty unless otherwise noted.

This article was originally published at mental_floss:
http://mentalfloss.com/article/79943/15-incredible-monuments-honor-american-soldiers