The Tribeca Film Festival, which takes place from April 24 to May 5, has announced its lineup and the schedule includes a prize-winning South Korean coming-of-age film, written and directed by indie filmmaker Kim Bo Ra.

House of Hummingbird first aired and won prizes at the 23rd Busan International Film Festival in October 2018, garnering more awards at the Seoul Independent Film Festival, and a Grand Prix for best feature film at the 69th Berlin Film Festival in February 2019.

The finely drawn story follows the life of middle school student Eun Hee, during 1994, the year when structural failure collapsed Seoul’s Seongsu Bridge, killing 32 people and injuring 17 more. In a sense, the film is autobiographical since Kim was in middle school when the bridge collapsed and although she did not know any of those who died or were injured, the tragedy strongly affected her community.

Eun Hee is played by Park Ji Hoo, who also appears in the film The Witness. Jung In Gi, who currently plays a corrupt police chief in The Fiery Priest,  is her sometimes cruel but generally concerned father.  Lee Seung Yeon, who appeared in the film Alive, plays her hardworking mother, while actress Kim Sae Byeok, who appears in the film Resistance, plays her teacher Young Ji. Eun Hee admires her new teacher and their interactions inspire the hope that her life may one day change.

Kim Bo Ra wanted viewers to immerse themselves in the minutiae of Eun Hee’s life, pacing the film so slowly that it distorts the perception of time. The effect of her time-bending approach is reminiscent of the award-winning coming-of-age film Boyhood, in the way that it helps viewers experience currents in the character’s daily life.

But pacing the film so slowly was not without risk. Audiences are used to quicker pacing.

“I was actually a little worried after I showed the rough cut to people,” said Kim. “We tried a really fast version of editing too based on feedback from others. We were trying to edit really fast and removed some scenes which changed the shape of the narrative and it didn’t work. It was faster, even more engaging, but the pacing was too fast. We thought, no, this is not a pace for this film. The film has to have our pacing, that’s Eun Hee’s pacing, that’s House of Hummingbird’s pacing. We didn’t have to follow others’ pacing, we created our own pacing.”

The idea for the story first came to Kim while she was working on her master’s degree at Columbia University in New York City. Learning a new language and coping in an unfamiliar city prompted some troubled dreams of what is arguably the worst time in most people’s lives. 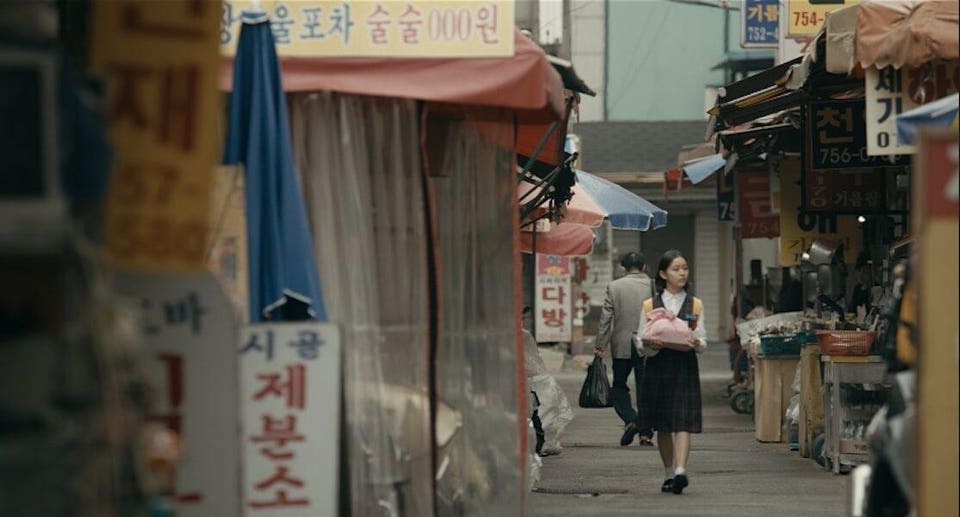 ‘House of Hummingbird’ is set in 1994, the year that the Seongsu Bridge collapsed.

In 2012 she decided to trust those feelings and wrote her film about a girl in middle school.

“Two days  after I finished shooting I had a dream that I went to a middle school reunion party and there I’m surrounded by all these teens from middle school that I didn’t like when I was in middle school. But at the party in the dream I felt so relaxed and at home surrounded by them. They were so friendly with me. I liked that in the dream. I felt very close to them, I felt connected to them. After I woke up from the dream I knew the film was the right thing to do.”

House of Hummingbird touches on various issues such as gender equality, domestic violence and the intense educational pressure experienced by many students in South Korea, but Kim says it’s not a film about oppression or violence, but rather a film that focuses on hope, on relationship and the connections human beings share.

“Without darkness, we cannot see the light, so I used a lot of conflict to shine more light into Eun Hee’s gender and into her journey.”

Eun Hee’s parents work hard, so hard, they have little time for her, while she is struggling to find herself. Her parents focus all their hopes on her older brother, who is academically gifted, but beats her. Despite their occasional cruelty, Kim did not paint Eun Hee’s family as thoroughly bad people. Nor are the peers who betray Eun Hee portrayed as villains.

“No one is evil. Every human being has reasons to behave badly. I wanted to depict why they are who they are. Also, even characters like the brother, the brother who  beats her, I wanted to depict why he’s beating her. He’s constantly oppressed by his father, who insists that he do really well in school, that he needs to study. Imagine how much stress this middle school boy has to deal with. Because he’s so stressed out and because he’s feeling terrible about it, he abuses his sister. I’m not saying that it’s right. It’s totally wrong.  But he’s not evil. It’s the outcome of a vicious circle.”

When the film first aired at the Busan Film Festival, Kim was exhausted from final preparations, but happy.

“You can tell if an audience really loves a film. You can tell by the energy. In the audience people were crying and then there were so many questions after the film, I could feel that strong energy from the audience. It was blissful. I was so thankful.”

Among her filmmaking inspirations is Edward Yang who made the award-winning Taiwanese film YiYi.

“He talks about Taiwanese history and also about human connections and struggles, conflicts around relationships and the violence of that time. He covers the universe just by depicting one family.”

That’s not unlike what Kim does well in the lyrical House of Hummingbird.

House of Hummingbird will air four times during the festival.