Meet the Nyack-based dynamic duo behind the Instagram sensation (and HGTV series) Cheap Old Houses, and learn what it takes to turn a neglected bargain into a dream home.

Elizabeth Finkelstein likes to joke that she got her Ph.D. in vintage homes when she was two, living in the 1850s Greek Revival house her parents lovingly restored near Saratoga Springs. “I grew up with the idea that a home is something you are a steward of, that you work on, that is a constant source of projects, inspiration, and creativity,” says Elizabeth, a licensed tour guide, professor, and architectural historian. “I went on to get an actual master’s degree in historic preservation, but I don’t think that’s what started my love of old houses. That’s just what professionalized it for me.”

Her husband, Ethan Finkelstein, a marketing strategist, is passionate about antique homes as well, and has happy childhood memories of visiting his grandparents’ 18th-century, 200-acre New Hampshire farmhouse. When that home eventually landed on the market, it was too pricey for the couple. So they started searching for an affordable fixer-upper which led to the launch in 2016 of their uber-popular Instagram account @cheapoldhouses which (as of press time) has 1.8 million followers. “For many people of our generation, even those with decently paying jobs, owning a home right now is really hard,” says Elizabeth, 38. “It’s a pipe dream for so many, especially our younger millennial Insta followers. They’re living in expensive cities and putting [most] of their money toward rent, especially now because of the Covid market.”

For Ethan, 41, buying an old fixer-upper is a way to achieve independence. “I think it’s the opportunity to dream a different dream,” he says. “If you buy a million-dollar house in the Hudson Valley, you’ll be in debt for 30 years.” So, for me, [restoration] offers a little bit of financial freedom, creative exploration, and not fitting in a cookie-cutter mold. What we are most enthused about are the hundreds of stories of people who purchased these houses off our social feed. [We love] seeing people across the country move into their own place, their piece of the American pie, and not having to go into debt while doing it.” 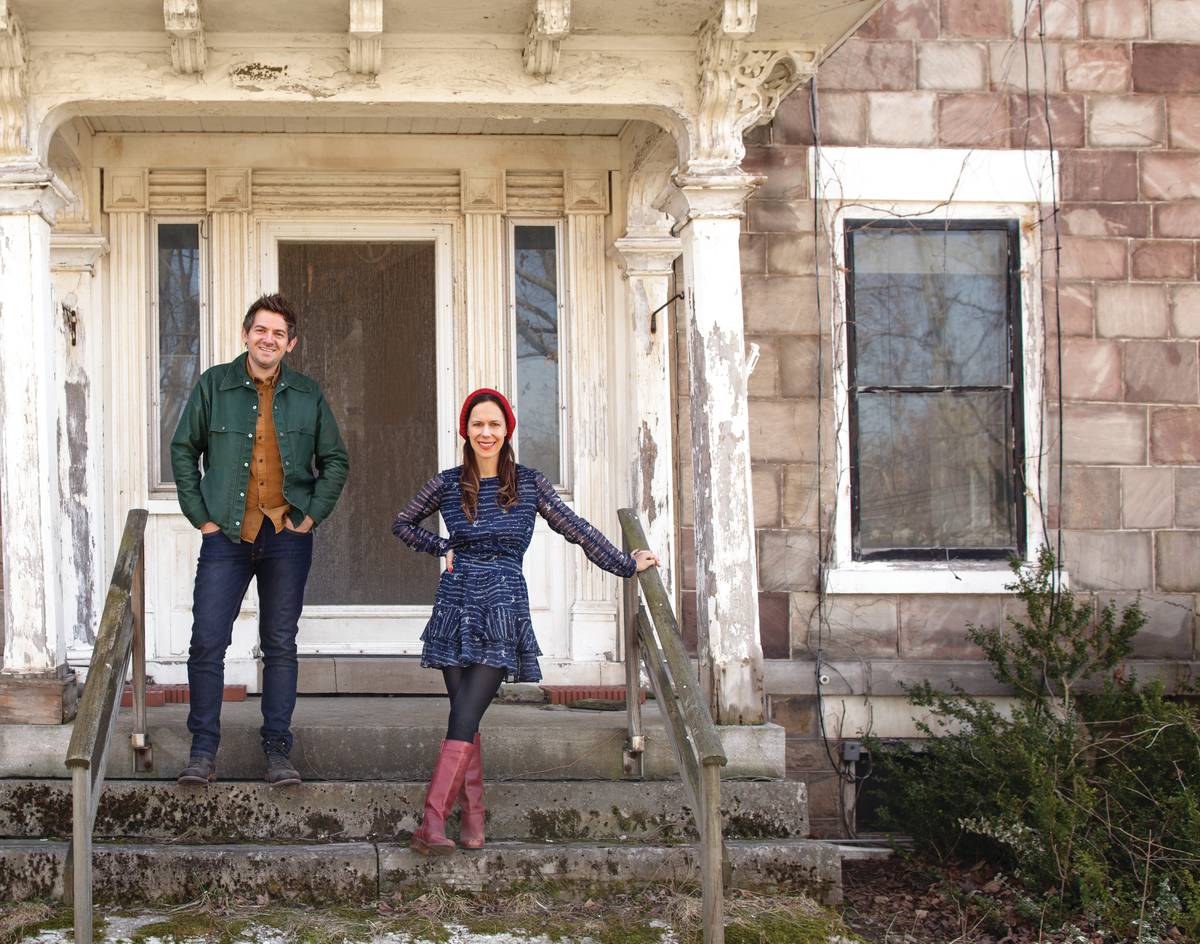 From Insta Hit to The Small Screen

The formula for inclusion in @cheapoldhouses is what Elizabeth describes as “a magical combination of original details and price.” Homes are capped at a reasonable $110,000 on Instagram (and $150,000 on the show). The couple searches for listings to include on the feed with the help of a full-time staffer. “We also have a very active following of people who send us houses every day,” says Elizabeth.

Given the enormous popularity of their Insta page, it’s no surprise that the Finkelsteins were approached by several television networks—but it took a few years for them to find the right fit, a working relationship in which they maintained creative control. They talked to various networks about what they didn’t want their show to be. They weren’t interested in a “flipping” show, in which homes are gutted and fitted with generic fixtures for a quick turnover. They also rejected the idea of quick fixes, such as one-day demolitions. “They’re not really our language,” says Elizabeth. “We sell shirts that say, ‘pocket doors.’ We don’t sell shirts that say, ‘demo day.’ We are all about preserving and sustaining the past. And I think HGTV, probably because of the number of followers we have, trusted that we would be able to bring people to the table. They took a bit of a risk on us.”

The 10-episode Cheap Old Houses show premiered last August (it’s available to stream on discovery+). In each episode, Elizabeth and Ethan drive their 1977 Ford-150, dubbed Old Blue, to several low-priced antiques on the market in various parts of the Northeast, the Midwest, and Texas. At each house, they catalogue what’s worth saving and what makes the dwelling a good buy (or not). Their genuine enthusiasm for historic details—from stained glass to 1950s-era pink bathrooms—is part of the appeal. “What we really love about the show is how truly authentic it is. The houses we show are actually for sale. We don’t stage them at all. And at the end of each show, we visit someone who actually restored an old house,” says Elizabeth. The couple point out potential challenges homeowners may face, creative solutions for problems, and the ways homeowners expressed their personal style. “Not everyone can afford to bring in a designer,” she adds. 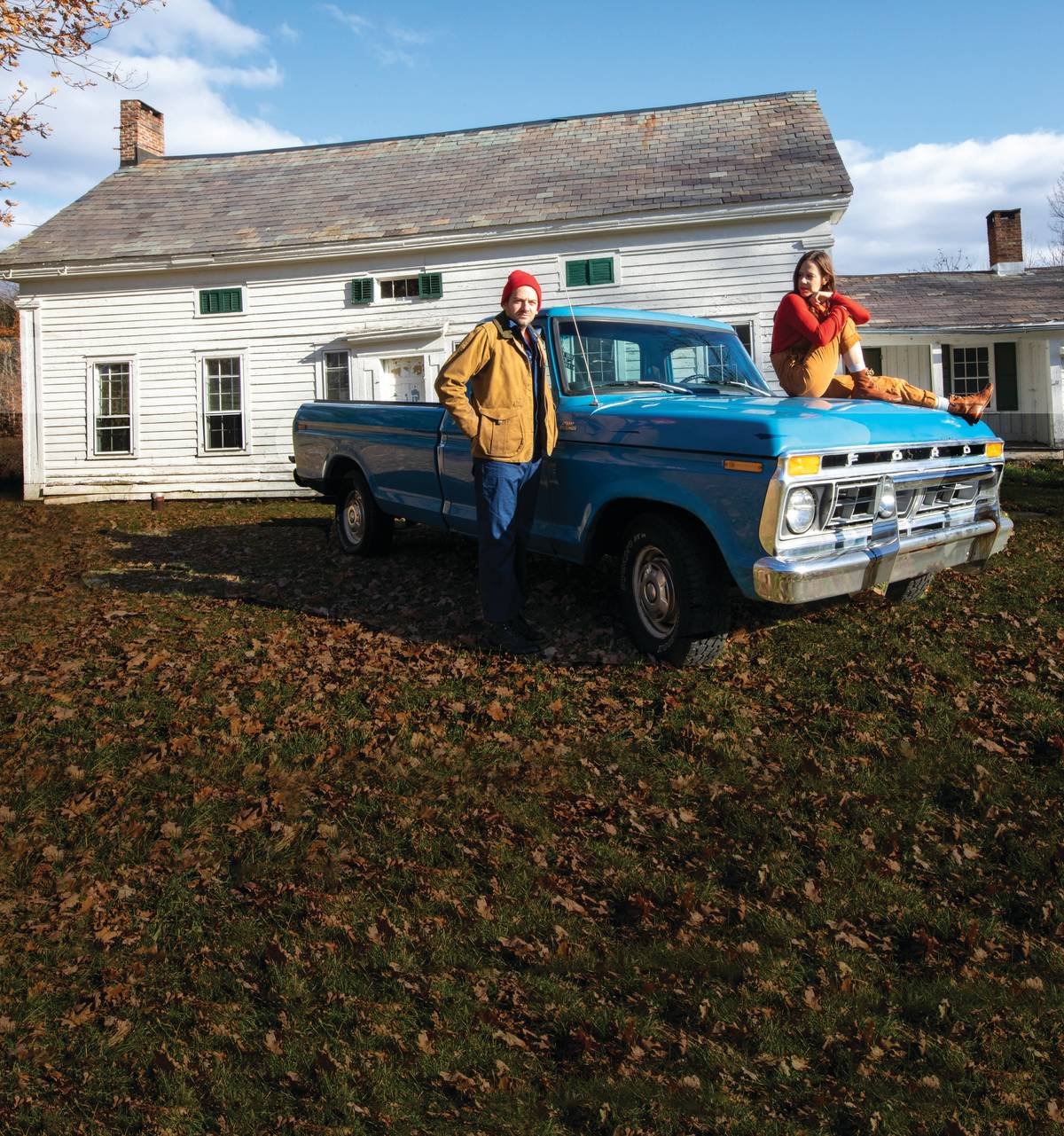 ARE YOU UP FOR THE CHALLENGE?

IF YOU’RE CONVINCED YOU NEED TO OWN A CHEAP OLD HOUSE CHECK OUT THESE EXPERT TIPS FROM ETHAN AND ELIZABETH:

■ If this is your first project, talk with as many people as possible before taking the plunge. Walk through the home with someone you trust, such as a general contractor or an inspector. They can help you determine any issues you might not readily see.

■ Have a good idea of what you can work on yourself and what you will need help to do.

■ Know your budget. Double it.

■ Consider all the repairs. What can you live with for a while? What needs to be fixed immediately?

■ Be cautious if there’s water in the basement, water coming through the roof, or anything is unlevel. Those are your big problems. Water issues need to be solved right away or they will cause more and more destruction. You must be sure the roof is sound. And if the foundation is unstable, you need to deal with that. In our experience, the majority of old houses don’t have those kinds of problems.

■ Save anything original, such as trim work, hardware and any kind of medallions, and windows. Those things are not coming back (i.e., they don’t make them like they used to). They can all be restored. 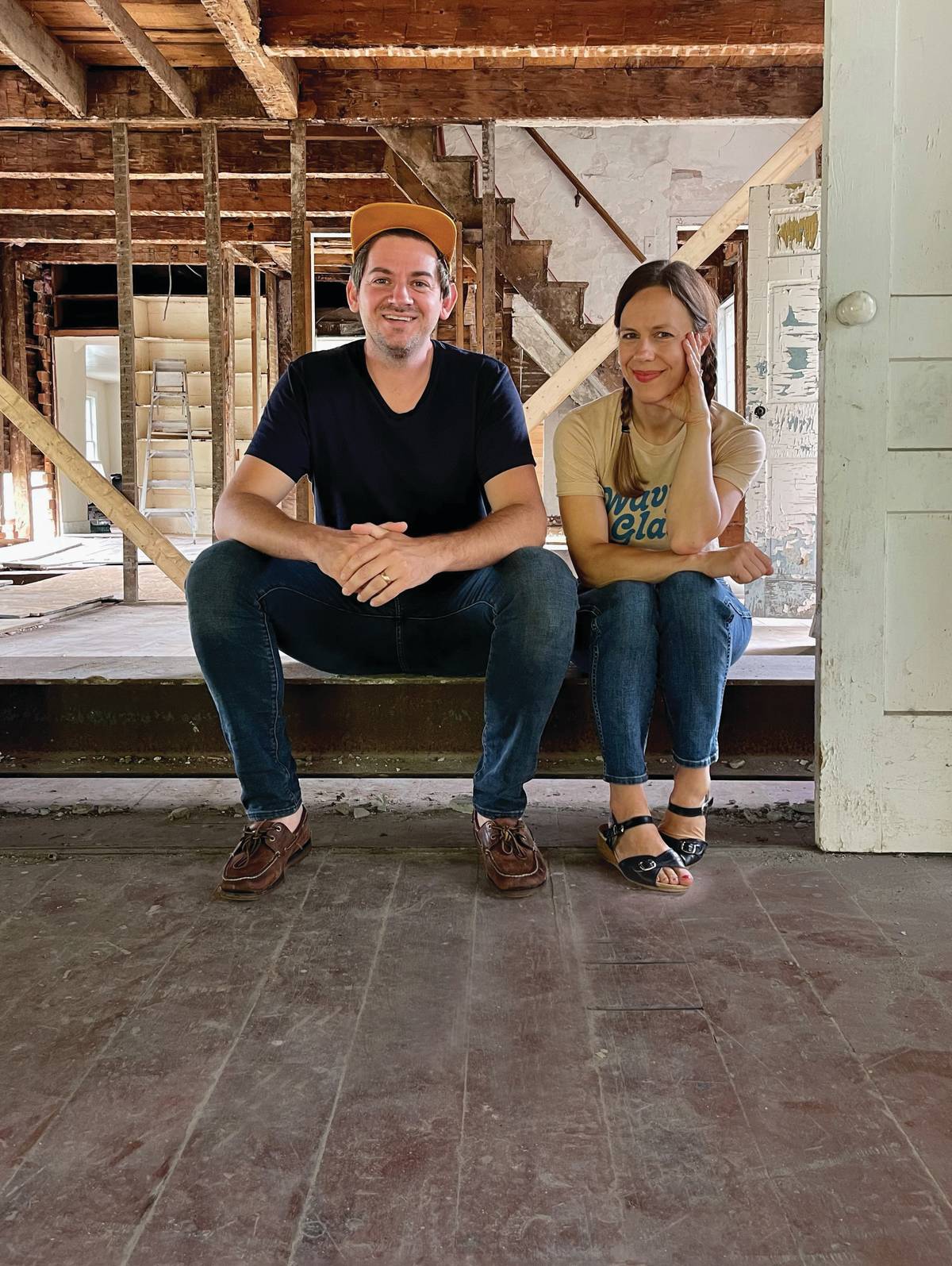 A few of the restored homes featured on the show include a 19th-century Greek Revival in Kingston, a petite bungalow in Rochester, and a crumbling Italianate mansion in the middle of an Illinois field. “What was so fun about seeing these homes is that none of them were actually finished,” says Elizabeth. “In addition to showing the audience what’s been completed so far, we also give them a glimpse of the second and third floor that are not even close to being done yet. That’s fun to see because you’re always busy with a project when you live in an old house.”

The Finkelsteins moved from a “very overpriced” Brooklyn neighborhood to a “still overpriced” 1940s Cape in Nyack in 2014, says Elizabeth. They are currently renovating a circa 1700s farmhouse in upstate New York, one of the oldest homes in the area. They are, of course, documenting the project on Instagram @fearnofixer (which has garnered over 15.7K followers and counting).

When the farmhouse landed on their listings of cheap old houses it reminded Ethan of his grandparent’s place and he really wanted to restore it. The couple hesitated because they didn’t have much money to invest, yet the wreck was impossible to resist. “There’s a small barn on the property, and a stream next to it,” says Ethan. “It has an old cemetery in the back, and it also has a pond. It was $70,000.” 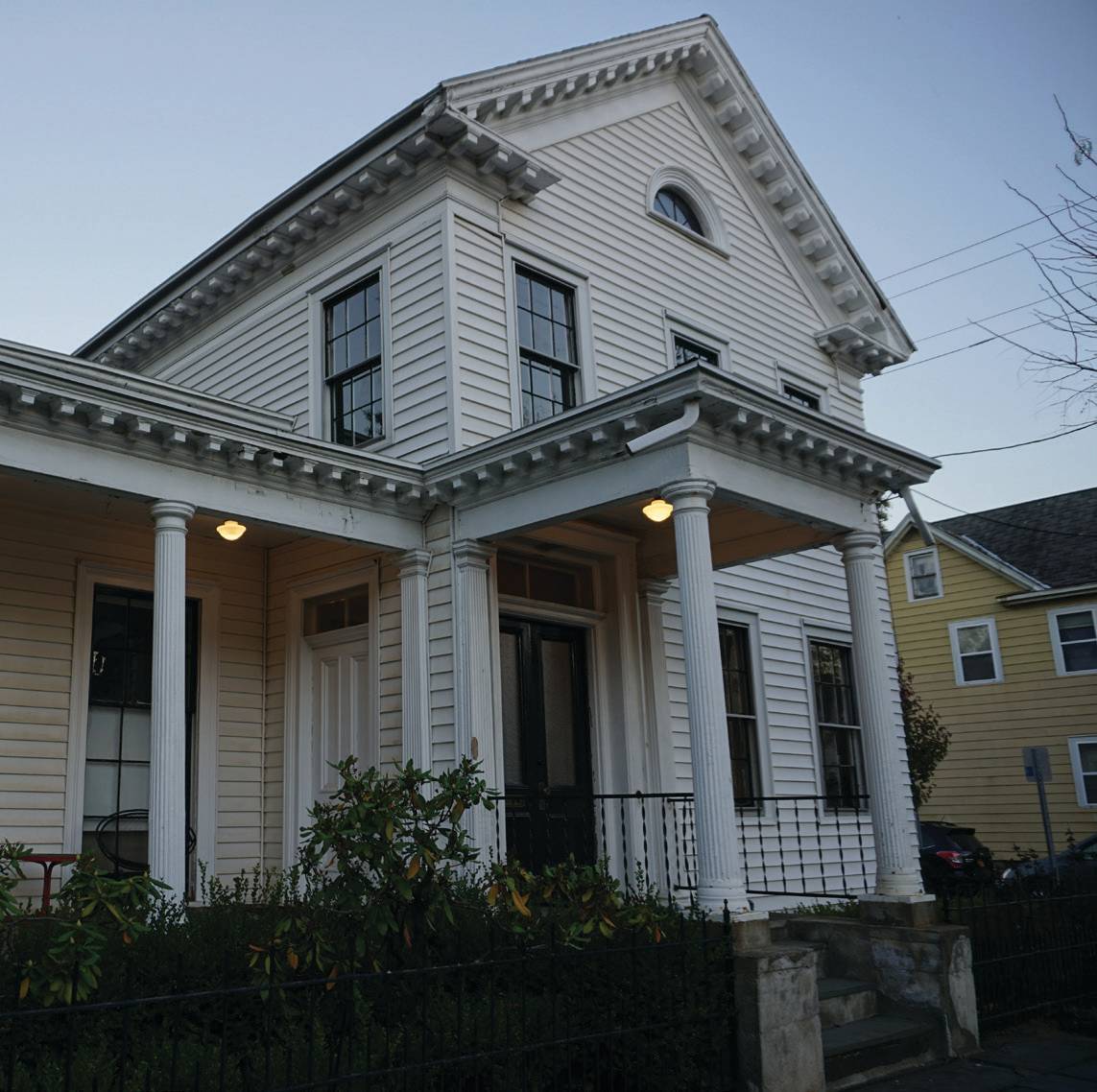 The couple has no immediate plans to relocate—their child attends school in Nyack and the farmhouse needs an enormous amount of work before it is habitable, including structural repairs. They head upstate on the weekends and whenever they have free time. “We’re looking forward to putting back a lot of the original features and characteristics, including two interior fireplaces,” said Ethan. “We’re a year in and probably have two more years to go. We feel very blessed to be working on this house. We’re salvaging a bunch of materials, a few fireplace mantles, some doors but also looking at new materials, including insulation.” 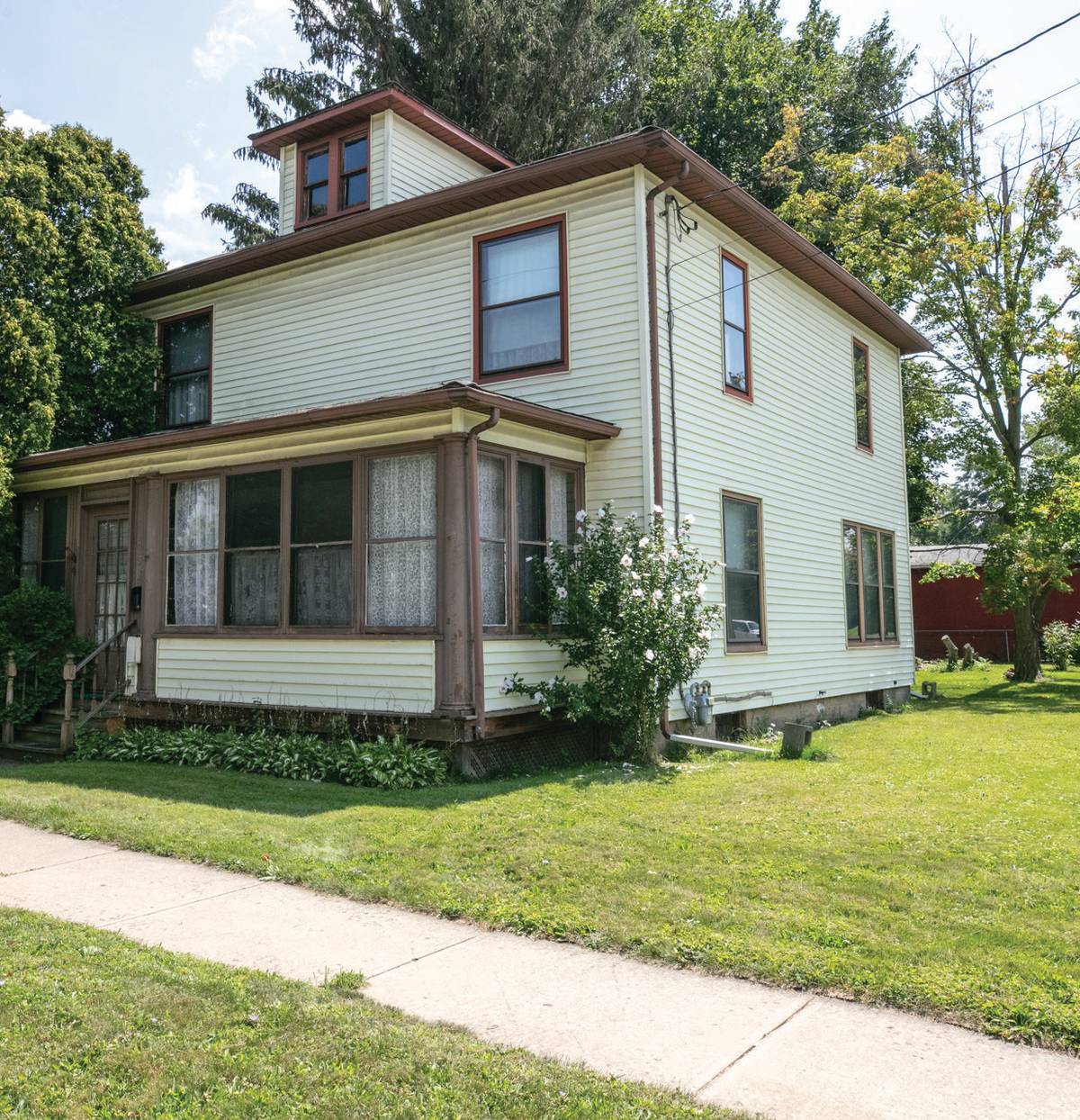 In addition to rehabbing the farmhouse and juggling various work projects, the couple still catalogs the many, many homes around the country that need to be lovingly restored. They would ideally like to rescue every beautiful cheap old home by letting prospective homeowners know what’s out there. And judging by the continuously growing enthusiasm on social media, there are many people like the Finkelsteins who find the urge to restore an old treasure simply irresistible. “You’re sitting in your cubicle—or wherever you’re working now—spinning your wheels, pushing pencils around, and you see a huge mansion in a field in Iowa,” says Elizabeth. “You can have it and it needs you and it’s a very alluring thing.”

This story was originally published in Hudson Valley Magazine.