Chef Shin Kim knows a lot about Korean food and a lot about k-dramas. As a translator for Dramafever, she’s currently translating and enjoying the food-focused drama “Warm and Cozy,” starring Kang So Ra and Yoo Yeon Suk. And while Chef Shin has prepared various cusines at Michelin-starred restaurants such as Jean Georges and catering establishments such as Abigail Kirsch, her real passion is preparing Korean food. That’s why she started her new food-focused business Banchan Story. 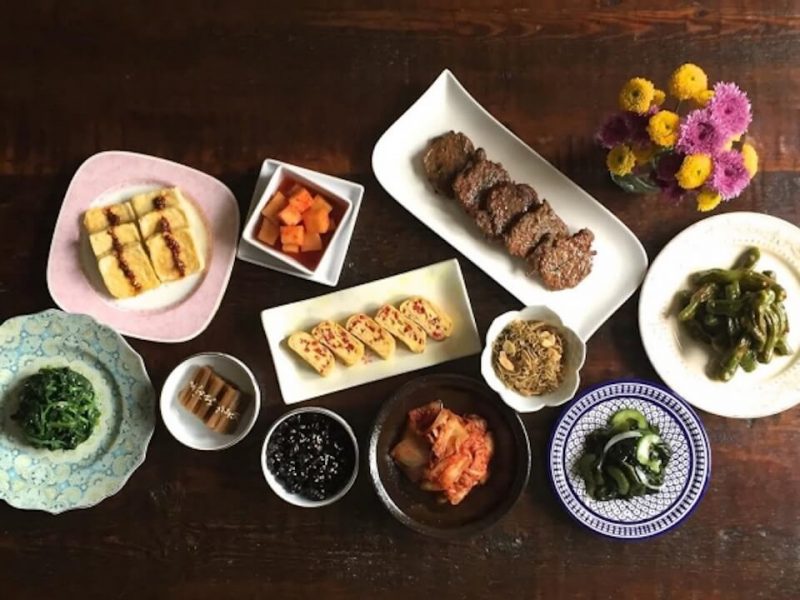 Banchan are all the small side dishes that accompany a traditional Korean meal.

Banchan are featured so often in dramas that a dish may become associated with a particular drama, like rolled omelets (Gyeran Mari) in “Secret Garden” or the glass noodles (Jap Chae) prepared by Lee Bo Young’s cook mom in “I Hear Your Voice.”

And although foodies are increasingly familiar with the names of main Korean dishes such as Bibimbap, they may not know the names of the side dishes or how to prepare them. That’s why she decided to give cooking classes that focus on everyday side dishes.

“Each one has its own name, its own method of preparation,” said Chef Shin. “It could be simple. It could be fermented. It could take a while to cook. With these classes, I can actually give more attention to the little dishes that people can cook at home and are healthy. I will pick dishes that are often featured in dramas, as well as dishes that are popular among Koreans. For the first set of classes, I will teach glass noodles with vegetables (Jap Chae), also scallion pancakes with seafood (Haemul Pajeon), kimchi style cucumber salad (Oi Muchim) and seaweed soup (Miyeokguk), also called birthday soup. All of these dishes have different stories tied not just to Korean dramas but Korean culture in general. I want to get into the cultural background.”

Chef Shin also plans another class that will feature fun dishes such as spicy rice cakes and noodles with black bean sauce (Jajangmyeon). The spicy rice cakes that are Korea’s most popular street food might be the food eaten most often in dramas. Lee Joon had to hide the dish from his parents in “Heard It Through the Grapevine” because they did not consider it suitable. Black bean noodles are the second most common dish in dramas. Jun Ji Hyun ate noodles with black bean sauce in “You Who Came From The Stars.” A few characters have eaten jajangmyeon in “Producer.”

Chef Shin figures that food is so often featured in the dramas because so many dramas focus on family.

“The background message in many dramas is the importance of family,” said Chef Shin. “Food comes along with family and that’s why characters are always eating and it’s all connected together in Korean culture.”

Chef Shin will launch Banchan Story on July 8 with an invitation-only hands-on cooking workshop. The theme will be “K-Cooking in K-Dramas,” sponsored by the Korea Foundation for International Culture Exchange (KOFICE). H-Mart will supply the ingredients. Her monthly cooking classes begin August 15 in NYC.

To learn more about Chef Shin and the classes, visit her website Banchan Story.

“You’ll learn how to make a balanced Korean home cooked meal,” she said. “I will go in depth about the cooking techniques to make the dishes and the cultural stories behind them. Whether it be how Korean moms make it or what Koreans think of these dishes or how they are featured on dramas or what dishes to look for in dramas.”

This article was originally published at KDrama Stars:
http://www.kdramastars.com/articles/86320/20150610/k-cooking-in-k-dramas-with-chef-shin-kim.htm