Since the 1950s, about 180,000 South Korean children have been sent to orphanages and adopted around the world. While inter-country adoptions provided these children with a new family and home, for many the pain of abandonment lingered, a sense of loss buried deep within, only to resurface years later. Some adoptees found it complicated to form a sense of identity in their new land, while knowing so little about the land they’d come from.

It’s a story that documentary filmmaker Glenn Morey knows very well. He was found on an orphanage doorstep in Seoul, one wintry night, when he was only two weeks old. Adopted by a family in the U.S., he grew up with the sense that his family’s stories were not his own. That his loving family did not look like him. That he was not part of their past. He eventually found a way to confront and reconcile the different legacies that shaped him.

While producing a film about the experiences of different racial groups in America, Morey was touched by the story of mother and daughter immigrants from the Philippines. When they described their experiences confronting racism and of being bullied in their new land, he felt overwhelmed, not only by their honesty, but also by how similar their experiences were to his own. He decided then that he needed to reconcile with his origins and to face long-submerged feelings about his adoption. As a way to learn more about Korean inter-country adoptees, Morey began working on the Side by Side project, a multi-media documentary. 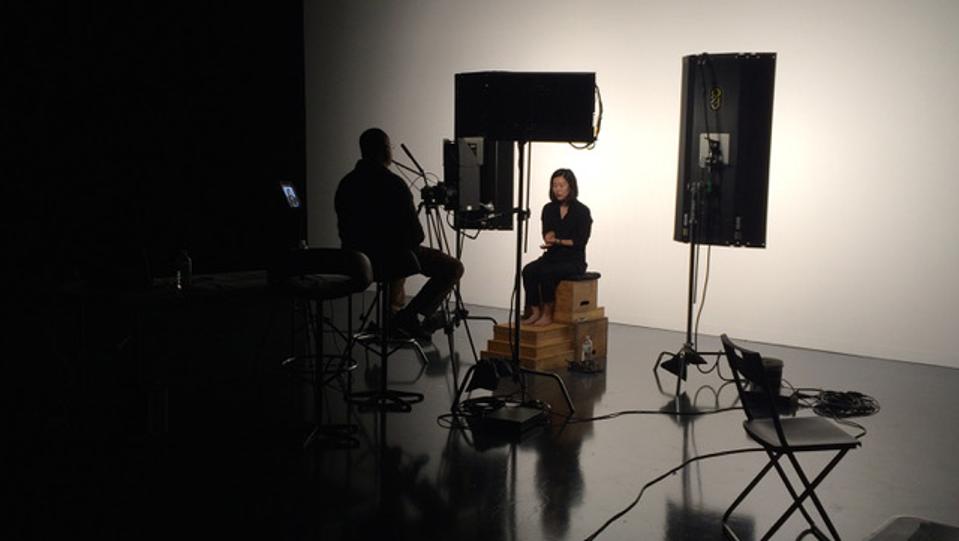 “My wife, Julie Morey, and I have been creative and filmmaking partners since the mid-‘80s,” he said. “Most of our work has been in commercial filmmaking for advertising and online content, along with a few very special documentary projects. When we exited our ad agency in 2012, we looked for a project that would fully leverage our creative, production, and media skills. We found Side by Side.”

Given their experience in media, with an emphasis in the multi-screen environment and cross-platform integration, the filmmakers decided to make Side by Side into a cross-platform, integrated project.

“Side by Side initially took the form of an online video installation—a website streaming 100 separate filmed interviews, a total of 21 hours of material,” said Morey. “Viewing these stories is so different from watching a conventional movie with a single beginning, middle, and end. With every resurfaced memory, every pause, every revelation, and as every minute goes by, viewers will come to know these storytellers intimately.”

Later, Side by Side was released as a starkly minimalist film, condensing essential elements of the experience into 38 minutes, a length suitable for online video streaming platforms and theatrical screening. Side by Side was then adapted into an even shorter documentary, the 16-minute film  Given Away, in partnership with The New York Times NYT +0.2% Op-Docs—tailored for the newspaper website and YouTube. The film remained on the top ten list on the New York Times website for over a week and had over 300,000 views on their YouTube channel. In 2019, the filmmakers presented Side by Side as a multi-screen video art installation in Seoul and New York City.

Why share the story in so many forms and not simply as a film?

“Is a film always a film,” said Morey. “Should any work of art be limited in its audience potential to a single venue? Should the selection of one medium rule out all others? Could a strong idea get even better, when allowed to explore a multiplicity of forms?”

For the project, the filmmakers interviewed 100 Korean adoptees in six languages, in 16 cities, and in seven countries. Subjects included men and women, ages 18 to 70.  Some of the featured adoptees left Korea as infants, but a few were older, with memories of the orphanages and their families of origin. Some flourished with their new families. Some did not. Whatever life had given them, they were all painfully aware of what they lost.

The directors chose not to frame the interviews with a list of questions. Instead, they asked the subjects to describe their adoption story in a roughly chronological way, starting with their earliest memories. After the camera was off, the filmmakers did ask some of the subjects how much of their adoption story they shared with other people. Most confessed they told very little of their story to family, friends and partners.

“These 100 stories are immensely valuable to adoptees, adoptive families, and our society at large,” said Morey. “We are absolutely determined to see that the project lives up to the importance of these stories.”

Morey, who is the recipient of hundreds of creative advertising awards, recently shared his thoughts on the project at a talk conducted remotely by The Korea Society. He noted that whether the adoptees struggled in life or were incredibly accomplished, even if they had families and wonderful lives, eventually they all talked about their adoption experiences in painful terms.

For Morey, sharing the experiences of Korean adoptees was transformative. The stories of so many strong people around the world were “incredibly revealing,” helping him to understand how he really felt.

“In my own journey, I’ve come to think of the Korean adoptee community as family,” said Morey. “Our stories are my story. Our joys are my joys. Our wounds are my wounds. Every adoptee I’ve ever met, every story I’ve heard informs my identity as an Asian American in race, a Korean American in ethnicity, and as a Korean-born adoptee in heart and mind. When I started this journey at the age of 42, and as a filmmaker over the past seven years, all of this is a gift—a gift that has allowed me to fully come to terms with my own story in an open and authentic way.”

The stories will be shared as an Audible Original in November, which is National Adoption Month. Historically, the month has been a venue for promoting adoption by adoption agencies and advocates.

“Over the past 10 years, however, many adult adoptees have taken the opportunity to flip the script—not specifically in opposition to adoption, but in an effort to bring adult adoptee voices into the adoption narrative, long dominated by adoptive parents and adoption agencies,” said Morey.”

The Audible Original will be an adaptation of the Side by Side interviews, using actual excerpts of select interviews. The filmmakers are also working on a printed book.