The house that Richard Pedranti designed for his friend Lawrence Mullane was in every sense a collaboration, as Mullane is not only the homeowner, but also the contractor who realized Pedranti’s design. It was a joint effort that employed Pedranti’s penchant for distinctive modern design while fulfilling Mullane’s wish for a traditional form of construction. Despite the contemporary glass-and-aluminum facade, the Mullane residence has the structural geometry of a barn.

“That’s what Lawrence asked for,” says Pedranti. “A barn.”

To create the structure, the home’s pine timber frame was handcrafted by a father-and-son team of barn builders in New Hampshire. Posts and beams were then disassembled, transported on a trailer and reassembled onsite. Best Attic Insulation Installation Here is the best insulation that suits this home. As a complement to these traditional elements, the sides of the glass-fronted house were clad with cedar clapboard, left unfinished to weather to a soft gray. The house sits on a foundation of locally sourced bluestone and, from the clapboard sides, looks so traditional, that it’s tempting to think the building has been there for a century. A zinc standing-seam roof tops the structure, visually referencing both the home’s glossy aluminum elements and the native bluestone foundation. 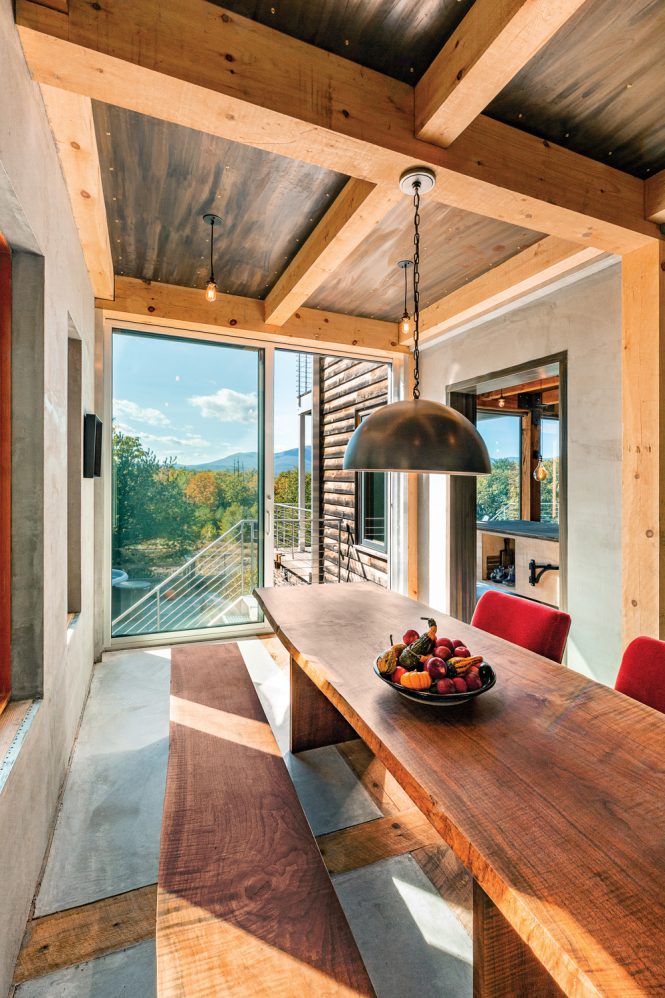 The home’s interior spaces are defined by the type of pine timber framing usually found in a barn. A simple wooden table seems right at home.

An Opening in the Forest

Before starting any design, Pedranti likes to visit building sites with his clients. It’s important to him that a home’s design elements reference the immediate environment. In this case, the site was a decommissioned bluestone quarry near Woodstock, with expansive views of the Catskills.

“We spent a lot of time on the site together before we started construction,” says Pedranti. “It was covered in forest and there was no road there. So, that required quite a bit of thought as to how to get up to that point and how to create the opening in the forest to take advantage of the views and maintain privacy and also create spaces that are outside that connect to the inside.”

Glass walls seemed the best way to make the most of the incredible vistas. “When you get up there the views are extraordinary,” says Pedranti. “The sunlight is perfect. It quickly became clear that we wanted to keep the geometry of a barn and just have a glass wall open to the view and the sunlight.” 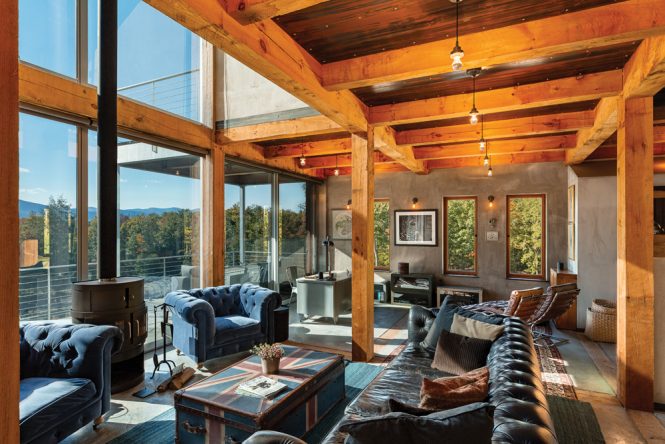 Tufted velvet and leather furnishings provide comfortable seating on which to socialize and enjoy the view. They were chosen in colors that harmonize with the natural surroundings.

The single-family residence is 1,800 square feet and features three bedrooms, plus an attic that provides additional sleeping space. Yet, given its location and floor plan, the home feels as open and as one with its surroundings as an aerie.

“It’s a wonderful place, just the feeling of being there on the side of this mountain and the views,” says Pedranti. “It’s a small house but it really doesn’t feel like that.”

Aluminum balcony supports, rails and facings neatly frame the home’s reflective front surface. It’s a material not usually employed so freely in home design, because fabricating elements from aluminum can be prohibitively expensive.

Mullane, whose company, Bronze Hill, Inc., builds high-end New York City apartments, was able to access building materials for below market price. Mullane also knew how to make much of what he wanted in the house. 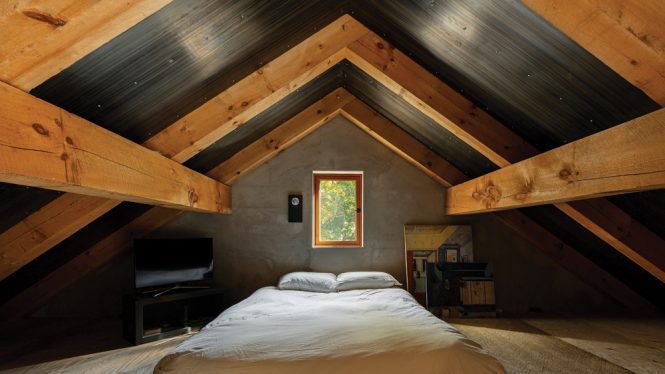 The home has three bedrooms, but an attic room adds additional sleeping space for guests.

“Whereas in a typical project for a homeowner, who is not doing things like that, we have to draw and specify all the parts, down to the screws,” says Pedranti. “With Lawrence, it’s more like working with a custom fabricator. On everything.”

The interior open floor plan features design elements made from steel, another uncommon and usually cost-prohibitive material for home design. Since the stairs feature steel components, Mullane decided he wanted to also have steel panels between the wood framing, creating a singular design feature.

Interior floors were crafted from locally sourced wood and the walls are mushroom-colored plaster, rather than sheetrock. Tufted velvet and leather furnishings provide comfortable seating on which to enjoy the view and were chosen in colors such as stone gray, russet brown, and a deep summer-sky blue that reference the surrounding natural environment. 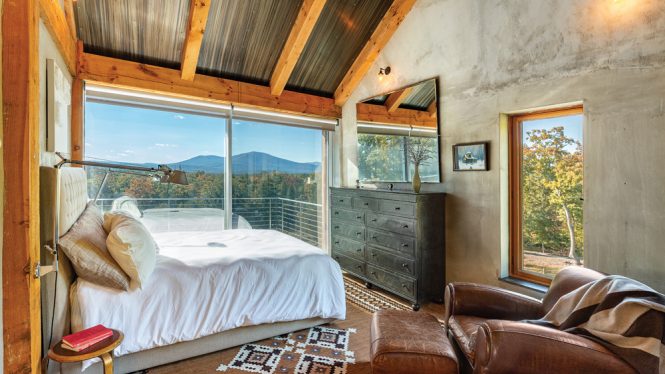 A mirror placed strategically over the dresser reflects and expands the view of the Catskill Mountains that can be seen through the home’s glass walls.

Energy efficiency was a priority for both the architect and the homeowner, so Pedranti used Passive House principles to reduce the building’s ecological footprint. For example, extra insulation was used inside the plaster walls and under the roof.

“The walls of the house are super insulated,” says Pedranti, “Which fulfills my desire to create a very comfortable energy-efficient home.”

The residence features an energy-efficient ground-source heat pump system and a solar system designed to make the home net-zero energy. Beyond their capacity for maximizing views, the sliding panels of the high tech glass walls provide passive solar heating. The overhangs on the home’s glass side were strategically placed to help control the incoming sunlight and inside window treatments help with any glare.

“The house is heated and cooled with a geothermal system and obviously there’s a big passive solar component to that,” says Pedranti. “It’s got radiant heating in the floors through that geothermal system. And then the cooling is via ductless mini-splits. There’s a nice European wood stove by a company called Rais. Lawrence tells me that there are a lot of times during the year that the heating never comes on, even in the winter because of the solar gain, but also because he’s got a wood stove which can really heat the whole house very easily.”

Pedranti specializes in Passive House and high performance buildings. Licensed in eight states, he’s worked on homes from Maine to Florida. After earning a graduate degree in design at Harvard University, he worked for Rafael Vinoly Architects and Steven Tilly before opening his own firm, Richard Pedranti Architect, now located in Milford, Pennsylvania. A lot has changed since Pedranti became a certified Passive House consultant in 2012. 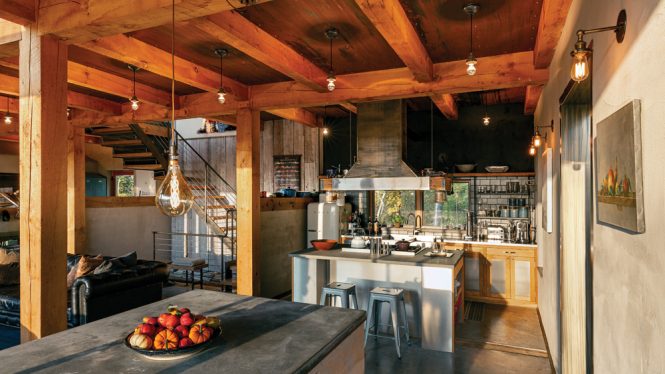 Although the kitchen is neatly tucked into a corner of the open floor plan, a work island offers the opportunity to talk to guests while preparing food.

According to Pedranti, energy-conserving materials that were difficult to get a few years ago are now easier to find and more affordable. Also, more homebuyers are aware of Passive House principles. Whereas Pedranti remembers having to explain and sell the concept only a few years ago, he now gets regular calls from clients who want to have a passive home.

“I was trained as a modernist at Harvard University and I have always been interested in modern architecture,” says Pedranti. “What was always missing from my education as an architect is the science part of it. When I discovered Passive House, I knew this was what was missing from my education. It’s the building science, the understanding of how to make very comfortable, healthy, and energy-efficient indoor environments by using the building enclosure itself and understanding the transfer of heat, moisture, water, and air through the building enclosure and managing those things through good design. Lawrence’s house in many ways was my first real opportunity to exercise those desires, combining modern architecture with modern building science.”

The house continues to evolve. “When we finished the house, there was no meadow in front,” says Pedranti, “So that happened over a few years and it was really a big enhancement to have this grassy area next to the bluestone quarry.” The meadow provides a good vantage point for watching the colors of the sunset mirrored in the home’s glass facade. “It looks beautiful in the evening,” says Pedranti. After the sun sets and the interior glows with light, the house looks less like a swath of reflected sky and more like an elegant piece of modern sculpture designed to harmonize with the rocky outcroppings that surround it.

This article was originally published in Upstate House.