Gianna Jun’s performance in Kingdom: Ashin of the North is a nuanced study in resentment and resilience. Her character, Ashin, discovers a resurrection flower that can bring the dead back to life, but at a terrible cost. If it were not for her tragic circumstances, the price might be too high. Her lone quest for justice has the potential to destroy a kingdom.

“Ashin holds the key to the origins of the living dead that have swarmed Joseon and the secrets of the resurrection plant,” said Jun. “She is an outsider who struggles to belong anywhere, living in the northern tip of Joseon, and after spending her whole life being subjected to contempt and mistreatment, she loses her entire family to a sudden attack. I let myself feel Ashin’s pain of living as an outsider and the sorrow from losing her family as I played the character.” 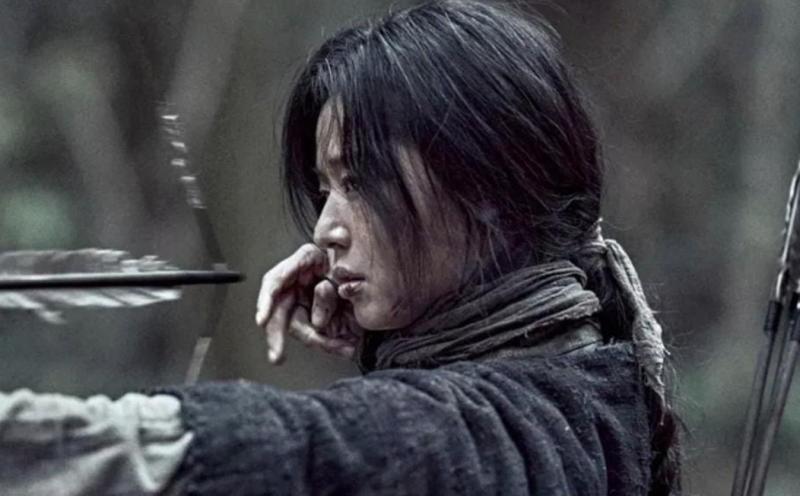 While watching the Netflix series, which first aired in 2019, Jun was intrigued by the premise. Taking a role in the special episode was an easy decision.

“I was very much interested in Kingdom, as it has set itself apart with its stunning cinematography and a fresh perspective on the themes like people’s hunger and thirst for blood, and as an actor, it was an intriguing project,” said Jun. “I decided to take on the role of Ashin because the special episode tells the story in the lead up to what happens in Kingdom. I found Kingdom: Ashin of the North particularly refreshing as the story revolves around the concept of collective grief and resentment (or “han” in Korean). The perfect teamwork between director Kim Seong-hun and writer Kim Eun-hee was also another important factor in making the decision, plus the fact that I was drawn to the whirlwind of fate Ashin finds herself in and the strong, charismatic presence of the character.”

Jun has a few riveting battle scenes in the episode, taking on both the living and the bloodthirsty undead. While battling the drama’s zombies, she kept her thoughts on the pain her character felt and how it propelled her need for revenge.

“She sets out on a journey for vengeance for her tragedy and when I was filming the scene where she needs to fight the zombies I tried to focus on her situation and the layers of pain that she carries in her heart,” said Jun. “Of course, zombies are scary, but I was mostly trying to focus on portraying my character and so I worked hard to do my best to perform well in action scenes. There were moments where I found fights with zombies interesting, as I was so immersed in Ashin’s situation.”

Jun so embodies Ashin’s tragic fate that those not familiar with her previous work might be surprised to see her play drama roles such as the fish-out-of-water mermaid character in Legend of the Blue Sea or the narcissistic superstar character in the fantasy rom-com My Love From The Star. Whatever the role, Jun approaches it wholeheartedly.

“Once I take on a role I always place myself in the shoes of my character and act like how that character would, which naturally helps me immerse myself in my role,” said Jun. “I transform everything about myself when I play a character, from the way I talk to my facial expressions and the way I look at others, so I find myself to have become a completely different person at the end of a project. That’s why I love every role I play. Of course, it’s hard to let go of a character at the end of a project, but I try to be cool about it because I know I still have a lot of roles to play as an actor and as an individual.”

Jun started her career as a model and appeared in a few films before her breakout hit My Sassy Girl in 2001. Her resume of film roles includes Assassination, The Berlin File and The Thieves, plus the English language adaptation of Lisa See’s novel Snow Flower and the Secret Fan. Jun describes her goal in acting as having fun.

“I feel like I’m the happiest person in the world when people love a project that I had fun working on. I had fun every day on set working on Kingdom: Ashin of the North because it’s a good story and I worked with great people.”

Jun can be seen later this year in Jirisan, also known as Cliffhanger, with Kingdom co-star Ju Ji-hoon. They play park rangers in Jirisan National Park. After that role she has no definite plans.

“I always want to be a part of a good story and am always open to trying something new,” said Jun. “I hope I can return with a new series or film in the not-so-distant future.”